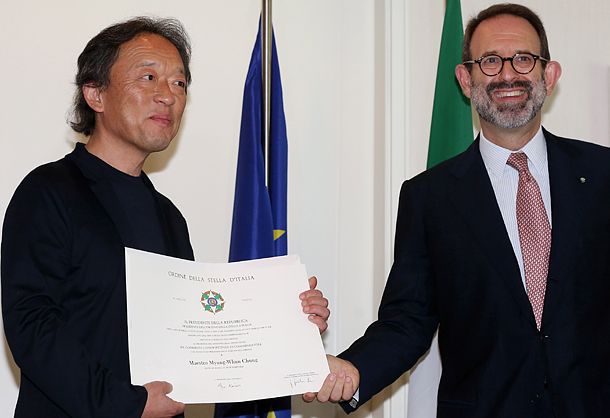 Maestro Chung Myung-whun, former principal conductor and an artistic director of the Seoul Philharmonic Orchestra, was bestowed the Ordine della stella d’Italia, or an Order of the Star of Italy, at the Residence of the Italian Ambassador in central Seoul on Thursday. Established in 1947, this order is awarded to foreigners or Italian expatriates who contribute to developing and enhancing friendly ties between Italy and other countries.

“Korea knows very well about Italian music and maestro Chung is the best example of this encounter between Italian and Korean music,” said Italian Ambassador Marco della Seta, adding that Chung’s long musical history includes many connections to Italy. “Those Italian musicians who have had the privilege to play under his baton unanimously displayed deep admiration for him and his work.”

Chung’s connection to Italy began in the late 1970s, becoming the first principal guest conductor of Tatro Comunale in Florence. He continues to regularly work with the La Scala Philharmonic Orchestra in Milan.

“I am not the kind of person who likes to receive awards but I will happily receive this order as I deeply love Italy and have always enjoyed working with Italian artists,” said Chung. “There’s one thing I regard more important than the quality of music and that is humanity and that is why I love working with Italy.”

Chung recently made headlines again for selling out tickets for the Lotte Concert Hall’s one-year anniversary concerts scheduled to take place on Aug. 18 and 19, and he’ll be directing the new “One Korea Youth Orchestra,” which is being launched by the Lotte Concert Hall next year. It is currently taking applications from young musicians.

Many wondered if Chung is making a comeback to work with Korean musicians after putting down his baton for the Seoul Philharmonic orchestra two years ago, after being mired in controversy over several scandals regarding alleged embezzlement and violation of his duty. Chung was cleared of all charges on June 23 after months of police and prosecutors’ investigations that several civic groups had filed against him.

However, Chung said Thursday at the ceremony that he’s not going to take any more permanent positions for orchestras, both inside and outside of Korea. Chung also recently left the music director position at the Orchestre Philharmonique de Radio France he held for about 15 years.

“I am now completely free from all the professional responsibilities,” said Chung. “From now on, I will only work with orchestras [as a guest conductor] that I enjoy working with and work for projects that moves my heart such as fostering young musicians and implant dreams into their hearts that one day we could perform together with North Korean musicians.”