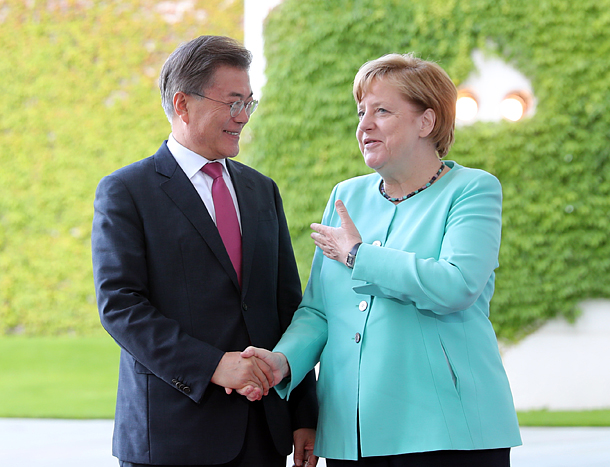 South Korea’s President Moon Jae-in has said the North’s weapons test this week indicated it is close to mastering intercontinental ballistic missile (ICBM) technology, voicing concerns that its rocket development was “much faster than expected.”

During a dinner meeting with German Chancellor Angela Merkel on Wednesday (Berlin time), Moon also said Pyongyang’s escalatory provocations call for stronger sanctions, but pressure must be applied to bring it to the negotiating table, not to undermine peace.

“The current level of the North’s nuclear and missile programs is a problem, but what is more troubling is their development is proceeding much faster than expected,” Moon was quoted by his spokesman as saying during the Berlin talks before the Group of 20 summit.

Moon, however, pointed out that although the missile’s striking range might have been extended, questions still remain over its accuracy and capability to carry a nuclear warhead.

“But given the current pace of their [weapons] development, we are in a serious situation where we cannot relax, and I believe the United States may think so too,” Moon added.

The North claimed Tuesday that it had succeeded in its first ICBM test, with the missile reaching a top altitude of 2,802 kilometers (1,741 miles) before splashing into the East Sea, some 930 kilometers away from the launch site.

Earth’s atmosphere extends to an altitude of about 1,000 kilometers.

The latest provocation, which drew international condemnation and calls for tougher sanctions, posed a policy dilemma to Moon, who was angling for dialogue with the reclusive regime in a shift from the erstwhile sanctions-centric approach.

In the talks with Merkel, Moon noted the need for a tough response to the missile launch, but efforts to “manage the situation” to prevent any unwarranted escalation should also be made along the way.

“The international community’s pressure (on the North) should have to be strengthened, but sanctions and pressure must be used as a means to bring the North to the dialogue table for its denuclearization,” he said. “It itself should not work to break peace.”

Moon also proposed to Merkel that Germany explore ways to have the G-20 summit present its joint resolve, possibly in a written statement, against the North’s evolving nuclear and missile programs.

Moon is currently on a two-day visit to the German capital. He is set to leave Thursday for Hamburg, where he and the German head of state will join 18 other global leaders for the annual G-20 summit.

Earlier in the day, Moon and Merkel agreed to boost their countries’ cooperation in ending the North’s nuclear ambitions, vowing to use all available means, Seoul’s presidential office, the Blue House said. The agreement came at their bilateral summit in Berlin on Wednesday.

The South Korean and German leaders agreed to closely work together to “fundamentally” resolve the North Korean nuclear issue through all available means, including sanctions and dialogue, the Blue House said.

In addition, Merkel expressed her support for Seoul’s leadership in international efforts to remove North Korea of its nuclear ambitions and missile arsenal, it added.

Merkel also expressed hope the countries’ cooperation will further develop into what she called a multi-dimensional partnership, calling South Korea an important partner in Asia that shares universal values with her country.

To this end, the two leaders agreed to launch strategic talks between their foreign ministers, according to the Blue House.

They also agreed to expand the countries’ trade relationship, noting the Korea-EU free trade agreement was becoming an exemplary deal that underscores the importance of free trade and market liberalization.