U.S. envoy at UN hints at use of force after test

U.S. envoy at UN hints at use of force after test 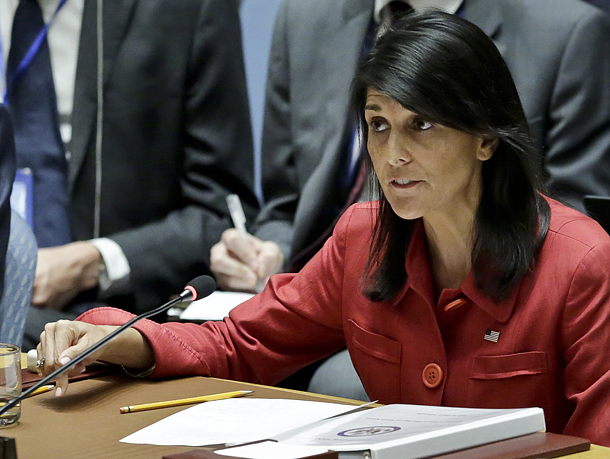 The top U.S. diplomat at the United Nations is pushing for tougher Security Council sanctions on North Korea following its latest missile test and warned Washington is ready to use its military capabilities to pressure China and Russia to back a new resolution.

“The United States is prepared to use the full range of our capabilities to defend ourselves and our allies,” said U.S. Ambassador to the UN Nikki Haley on Wednesday in an emergency meeting of the New York-based Security Council. “One of our capabilities lies with our considerable military forces. We will use them if we must.”

The 15-member council convened an open meeting to discuss North Korea, and members condemned the isolationist regime’s launch of a ballistic missile with possible intercontinental capability on Tuesday.

“Make no mistake: North Korea’s launch of an intercontinental ballistic missile (ICBM) is a clear and sharp military escalation,” Haley said during the meeting, warning that Pyongyang’s actions are “quickly closing off the possibility of a diplomatic solution.”

Along with possible U.S. military action, Haley raised trade as a leverage point as she upped pressure on China and other countries supporting North Korea to back new sanctions, saying that Washington could halt trade with them if they keep aiding the North.

She said she spoke with U.S. President Donald Trump at length on the issue earlier that morning.

“There are countries that are allowing, even encouraging trade with North Korea in violation of UN Security Council resolutions,” Haley continued. “Such countries would also like to continue their trade arrangements with the United States. That’s not going to happen.”

Haley said the U.S. will soon submit a draft resolution aimed at raising the international response “in a way that is proportionate to North Korea’s new escalation.”

Such measures, she said, could include cutting off major sources of hard currency to the regime, restricting the flow of oil to North Korea’s military and weapons programs and increasing air and maritime restrictions.

The Security Council passed a new resolution on Pyongyang in early June, but it was a watered down version from a U.S.-led draft and only expanded a blacklist on entities and individuals. It did not introduce any new measures.

“Much of the burden of enforcing UN sanctions rests with China,” Haley said more bluntly, adding that 90 percent of trade with North Korea is from Beijing. “We will work with China… But we will not repeat the inadequate approaches of the past that have brought us to this dark day.”

Haley invited any country that is “happy” with North Korea’s actions or wants to be its “friend” to veto the upcoming resolution, while encouraging those who view its actions as a threat to vote with the international community to strengthen sanctions.

In a challenge directed at fellow veto-wielding nations China and Russia, she continued, “And if you choose not to, we will go our own path,” indicating possible military action.

Haley said more directly that North Korea had not shown “any care for Russia or China,” adding, “They’re not going to listen to anything you say.”

To oppose a sanctions resolution, Haley said, “means you are holding the hands of Kim Jong-un,” the North Korean leader.

Both Russia and China objected to the use of force while emphasizing a joint initiative on North Korea announced earlier this week following a summit between presidents Vladimir Putin and Xi Jinping.

It called for a dual-track approach that includes suspensions of North Korea’s nuclear and missile tests as well as U.S. and South Korean joint military exercises.

Chinese Ambassador to the UN Liu Jieyi and Russian deputy ambassador Vladimir Safronkov both diverted attention during the meeting to complain about the deployment of the U.S.-led Terminal High Altitude Area Defense (Thaad) antimissile system to South Korea.

Liu, president of the council this month, said, “China has always been firmly opposed to chaos and conflict on the peninsula. Military means must not be an option in this regard.” He called for parties to demonstrate a willingness to enter into unconditional dialogue.