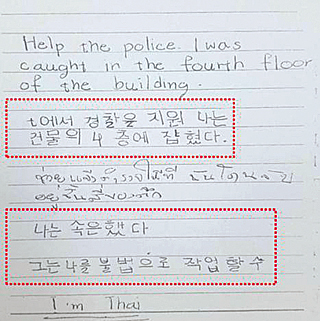 One of five Thai sex slaves handed this note to a cashier at a Busan supermarket. [BUSAN METROPOLITAN POLICE AGENCY]

Six people in Busan have been charged with holding five Thai sex slaves in a building for months and forcing them to sleep with at least 53 men, including three college students and a contract public servant, according to police.

Busan police officers said they were going down a list of about 300 other men who are suspected to have paid for sex. The head pimp had over 20,000 phone numbers saved on his cell phone, police said, which suggests that the investigation may expand.

One of the women said she was “forced into prostitution” by a 40-year-old Korean man, who said he would offer her a job at a massage parlor. The alleged victim arrived in Korea on a travel visa.

Police said the Thais were trapped in a four-story building in Busan from March to May. Their “clients” usually paid 100,000 won ($87), but the women received none of this for the first month and only 40,000 won per session from the second month.

The case came into light on May 16 at around 4:20 a.m., when the Thai women walked into a local supermarket in Busan. One crew member handed the cashier a note while pretending to buy a can of soda. On the note was a handwritten message in broken English, Korean and Thai, part of which read: “Help the police. I was caught in the fourth floor of the building.”

According to police, Kim asked for the woman’s phone number, saying out loud he needed it in order to add points to her membership card. A man had been standing guard near the front door of the supermarket.

The woman, frightened of her captor, drew an “X” across Kim’s message and rushed out of the store with the four other Thai women. Kim handed the note to a nearby police station at 8:30 a.m. after he got off work. The case was assigned to the international crime investigation team, who discovered that the phone number matched that of a 38-year-old Korean man who was previously caught running a brothel. On May 18, police received a call from a support center for foreign workers in Osan, Gyeonggi, who said they had found a message on a social media platform from a Thai woman who claimed she was being held as a sex slave in Busan’s Jin District. The venue, she said, hung a sign advertising itself as a fortune-telling establishment. Police raided the building on the same day and busted the sex slavery ring.