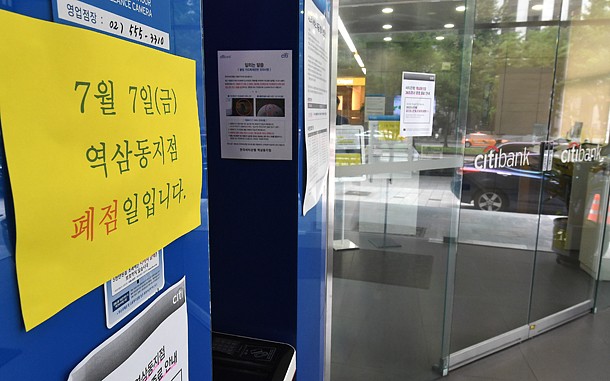 A notice informing customers that the Citibank branch in Yeoksam-dong, southern Seoul, will close on July 7. Citibank Korea shut down five locations in Seoul and Gyeonggi on Friday as part of a plan to reduce its branch network by 80 percent. [YONHAP]

Citibank Korea began a large-scale reduction of its branch network on Friday, shutting down five locations in Seoul and Gyeonggi as part of efforts to move most of its banking services online and over the phone.

By the end of the year, only 32 out of 133 branches across the country will remain, as the bank reorients its focus toward wealth management and digital banking with fewer customers visiting brick-and-mortar branches.

The early closures took place in Yeoksam-dong and Munjeong-dong in southern Seoul and the city of Guri in Gyeonggi. Another 30 branches are scheduled to close by the end of this month. Citibank said it would transfer resources to its wealth management centers.

Major domestic banks like KB Kookmin and Shinhan have also cut the number of their brick-and-mortar branches in recent years but not nearly as aggressively as Citibank. Korea’s financial authorities are keeping a close watch on the move given the scale of the closures and concerns about downsizing.

The Financial Supervisory Service, the country’s financial watchdog, dispatched officials to the closing branches on Friday to monitor the process and ensure clients don’t experience major inconveniences. So far, no major incidents have occurred, a source at the service said.

The country’s financial regulatory agency, the Financial Services Commission, is also on alert.

Last month, it issued an administrative guidance to financial institutions urging them to pay attention to consumer protection, management stability and security when they close more than 10 percent of their branches.

The commission denied media reports that the guidance was intended to discourage banks from scaling down their brick-and-mortar presence.

“In principle, the decision regarding the management of network channels wholly belongs to banks and is not something in which the regulator steps in and gives directions,” the Financial Services Commission said in statement. “[The guidance] is only intended to prevent any problems related to stability and consumer protection.”

Those in the industry, however, are more skeptical and believe banks, especially local ones, could interpret it as a red flag when they consider cutting back branches.

“The Financial Services Commission doesn’t want to be seen as keeping a tight rein in the industry,” an industry source said. “Still, the guidance will likely place pressure on local banks, and given the Moon Jae-in administration is focusing on job creation, banks will take a more cautious approach.”

When asked about Citibank’s decision to cut branches, Choi said earlier this week that, “The efficient reduction of bank branches is at odds with job creation.”

Citibank Korea’s labor union has opposed the branch closures and even threatened a full strike. The members filed an injunction to nullify the closures, but the court rejected the complaint.

The bank sought to persuade union members by assuring that no layoffs would take place.