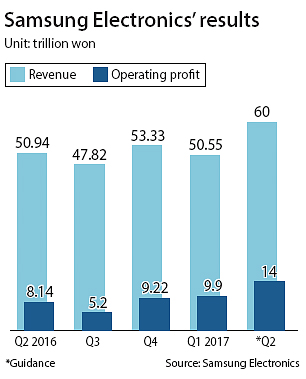 Samsung Electronics is expected to report a record operating profit of 14 trillion won ($12.1 billion) in the second quarter, up 72 percent from the same period a year earlier, thanks to vigorous demand for memory chips, the tech giant said in an earnings guidance Friday.

That result beat an analysts’ consensus of 13 trillion won.

Samsung Electronics’ previous high for its quarterly operating profit was 10.16 trillion won in the third quarter of 2013.

The world’s No. 1 smartphone producer’s revenues also surged 17.8 percent on year to 60 trillion won during the April-June period.

Despite the recall and discontinuation of the exploding Galaxy Note7 and the absence of its de facto commander-in-chief Vice Chairman Lee Jae-yong - who is behind bars to stand trial for corruption in the scandal that led to the impeachment and removal of Korea’s president earlier in the year - the second-quarterly operating profit is set to surpass Apple’s quarterly operating profit for the same period for the first time. The iPhone maker, the world’s No. 1 company by market capitalization, is scheduled to release its quarterly earnings results on Aug. 1. Its operating profit is estimated at $10.49 billion.

Results for Samsung’s individual businesses were not given in the guidance. But analysts estimate the semiconductor division raked in over 8 trillion won in operating profit, or 57.1 percent of the total, as demand for DRAM and NAND flash storage chips exploded amid a global supply shortage.

NAND and DRAM are integral part of an electronic system - for smartphones in particular. As more consumers purchase connected devices with improved processing capacity and an increasing number of servers and data centers are built, memory chips will continue to be in high demand. The price of DRAMs has been increasing at a steady pace.

“It seems like our preemptive investment in semiconductor production facilities, added to the recent super cycle in semiconductors, has borne fruit,” said a Samsung spokesman.

“When considering Samsung’s technology and price negotiation capacity, profitability at its semiconductor division will be an impregnable force behind its earnings in the future,” said Kim Kyung-min, an analyst at Daishin Securities.

Some optimistic researchers predict Samsung, the world’s second-largest chipmaker and No. 1 producer of memory chips, might surpass the industry’s top player, Intel, in revenue this year for the first time.

Samsung’s latest flagship smartphone, the Galaxy S8, also helped. Since its release in April, the company has shipped an estimated 20 million units and its yearly sales are expected to be as high as 60 million, compared to its previous best seller, the Galaxy S7, which had annual volumes of 49 million units.

The results from the mobile division are expected to improve further should the highly-anticipated Galaxy Note 8, which is expected to debut in New York at the end of August, be a hit.

Despite the upbeat results, shares of Samsung Electronics edged down 0.42 percent to end at 2,393,000 won on Friday as foreigners net sold 74 billion won worth of shares. Brokerage houses, however, scrambled to lift up target prices. SK Securities has set the highest goal at 3.2 million won, whereas other firms such as Eugene, eBest and Yuanta adjusted theirs to 3 million won. The average for 23 brokerage houses is 2.84 million won.