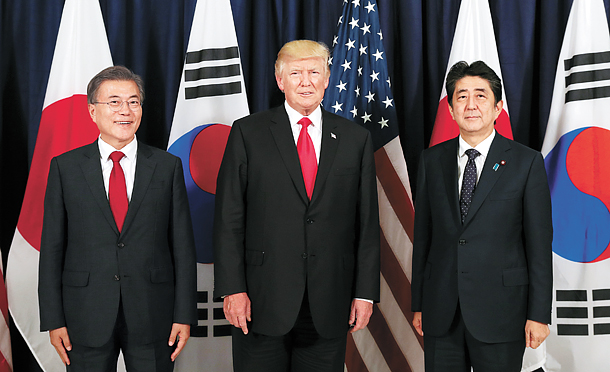 Talks between the three leaders were held over a dinner for about 90 minutes at the U.S. Consulate General in Hamburg, Germany, ahead of a Group of 20 summit. They discussed how to respond to North Korea’s nuclear and missile programs, especially following its long-range ballistic missile launch earlier this week.

“The leaders of the three countries agreed upon the importance of producing a stronger UN Security Council resolution expeditiously, to put much greater pressure on North Korea than before,” South Korean Minister of Foreign Affairs Kang Kyung-wha, who also attended the meeting, told reporters afterward. She said that they agreed this has to be done in a “peaceful manner.”

She added that the three leaders noted the importance of Beijing actively playing a role in the North Korea nuclear issue, stating they plan to “closely communicate” with China and Russia through bilateral and multilateral talks held on the occasion of the G-20 summit.

The three leaders noted that the North’s nuclear and missile capabilities are advancing quickly and agreed on the need for “much greater pressure” to halt this.

Trump emphasized that sanctions on North Korea will not be effective without China properly enforcing them, and was said to have relayed that the United States is reviewing additional sanctions against Chinese individuals and entities that have had illegal transactions with North Korea. Such sanctions on third-country entities are referred to as “secondary boycotts.”

According to diplomatic sources, the United States is also pushing to include a ban or limit on oil exports to North Korea and the hiring of laborers from the country in the Security Council sanctions resolution draft.

The last time the leaders of the three countries met was in Washington in March 2016 on the sidelines of a nuclear security summit. This was the first such trilateral summit since Trump and Moon came into office. Moon and Trump held their first bilateral meeting in Washington at the end of last month, where they agreed that denuclearization of the Korean Peninsula should be achieved in a peaceful manner, leaving room open for dialogue with the North under the right circumstances.

But North Korea tested what it called its Hwasong-14 missile on Tuesday, which the Pentagon acknowledged was unlike anything it had seen before from Pyongyang and had the longest flight time to date. North Korea said it was an intercontinental ballistic missile (ICBM) and the Pentagon agreed, but Russia says it wasn’t and South Korea hasn’t definitively said.

Trump said at a news conference in Warsaw on Thursday, “I have some pretty severe things we’re thinking about,” in response to the North’s latest missile test.

“That doesn’t mean we’re going to do them. I don’t draw red lines,” he added, speaking alongside Polish President Andrzej Duda before heading to Hamburg. “It’s a shame they’re behaving this way, and they’re behaving in a very, very dangerous manner, and something will have to be done about it.”

The Pentagon chief however denied that Washington may be heading toward military action.

U.S. Secretary of Defense Jim Mattis told reporters in Washington Thursday after the president’s remarks, “I do not believe this capability in itself brings us closer to war.”

He said that both Trump and Secretary of State Rex Tillerson have been “very clear that we are leading with diplomatic and economic efforts.”

Moon and Abe also held their first bilateral talks on Friday. There was interest to see if they could come to a consensus on issues such as North Korea and economic cooperation, while they also had to iron out their differences over the Dec. 28, 2015 bilateral deal which was aimed at resolving the issue of the Japanese military’s wartime sexual slavery.

Moon has emphasized that the agreement is not accepted by most of the general public in Korea. But he has not actually called for the agreement to be renegotiated since he took office in May, though the deal has faced backlash from victims and civic organizations for not properly acknowledging Japan’s legal responsibility.

Japan has been demanding Korea remove statues symbolizing the sex slave victims, referred to euphemistically as comfort women, near its embassy in Seoul and consulate in Busan. Moon said to Abe as they entered bilateral talks, “Let us meet frequently and have many opportunities to have deep dialogue.”

Abe replied that he hopes to establish new, future-oriented bilateral relations with Moon, especially calling for close coordination on the North Korea issue. They also agreed that North Korea’s nuclear and missile program is an urgent and serious threat and that denuclearization should be achieved in a peaceful manner, said a Blue House official. But they did not narrow their differences on the comfort women issue.