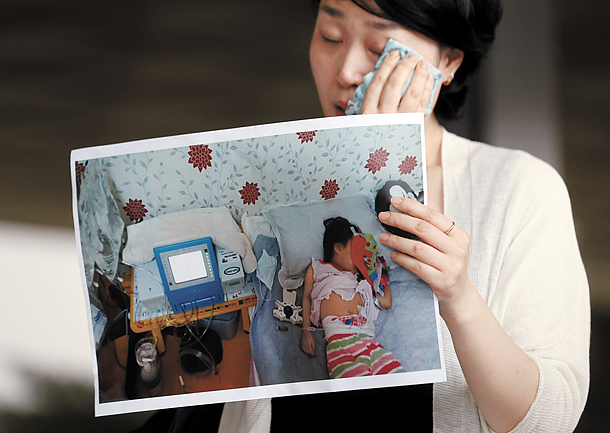 Choi Eun-joo sheds tears while holding a picture of her five-year-old daughter, who must undergo nine hours of peritoneal dialysis on a daily basis, at the Seoul Central District Prosecutors’ Office after filing a complaint against McDonald’s Korea on Wednesday. [YONHAP]

What was supposed to be a family outing to a fast food chain turned into every parents’ nightmare, and Choi Eun-joo is now waging a legal battle with one of the world’s largest corporations: McDonald’s.

Choi and her husband took their four-year-old daughter and two-year-old son to a McDonald’s branch in Pyeongtaek, Gyeonggi, last Sept. 25. The daughter, whom the mother only wished to be identified by her surname, No, had begged her parent to get her a Happy Meal. Like countless other kids, the young girl wanted the toys that accompany it.

Choi realized something was wrong hours after the outing.

“She came up to me and said her stomach was hurting,” said the mother, who was raised in Indiana and went to Indiana University, in an interview with the Korea JoongAng Daily in a café in Anseong, Gyeonggi, on Friday.

Her husband and son also had stomach trouble. But they recovered after having diarrhea. The daughter’s health deteriorated steadily. The stomachache led to severe vomiting and enteritis. On Oct. 1, her heart stopped for an agonizing four minutes.

Doctors said the four-year-old caught hemolytic uremic syndrome (HUS), widely known as “hamburger disease,” a type of bacteria infection that can leave the renal system severely damaged. Children under the age of five are known to be particularly vulnerable because their immune systems are not fully developed. As the nickname indicates, many cases of HUS are caused by the E. coli bacteria, which can be found in undercooked meat like hamburgers.

Choi thinks her son was spared because he only at a tiny part of his burger, about the size of his pinky. Her husband finished the son’s burger, but his immune system was strong, Choi said.

“A doctor told me on Oct. 1 that we had to brace ourselves for the worst after my daughter was moved to the intensive care unit,” continued the 37-year-old mother. “And then her heart stopped. It remained stopped for four minutes until it was revived by CPR.”

Doctors told the family that the bacteria had ruined not only the daughter’s renal system but swept through her body and even invaded parts of her brain. Doctors warned she might have suffered brain damage, but that wasn’t the case.

But the girl continues to suffer. She must undergo nine hours of peritoneal dialysis everyday. Not a single day can be skipped as it would threaten her life. A docking tube for the dialysis machine permanently sticks out of her abdomen.

Choi contacted McDonald’s Korea and explained the situation. Choi wanted her daughter’s medical bills covered by the multinational. The fast food chain demanded a medical certificate that stated the condition of the girl. Medical certificates are only issued when a patient is discharged from a hospital. So Choi waited until December, when she brought her daughter home.

To her surprise, McDonald’s declined to cover the bills, saying there was no evidence its burger caused the girl’s medical plight.

“They demanded that a doctor must specifically and clearly state in the medical certificate that my daughter contracted the bacteria from a McDonald’s hamburger. They said without such a statement, they can’t accept my coverage request,” said the mother of two. “But every doctor I consulted with said they can’t write that on the certificate because it’s not what medical certificates are supposed to state.” 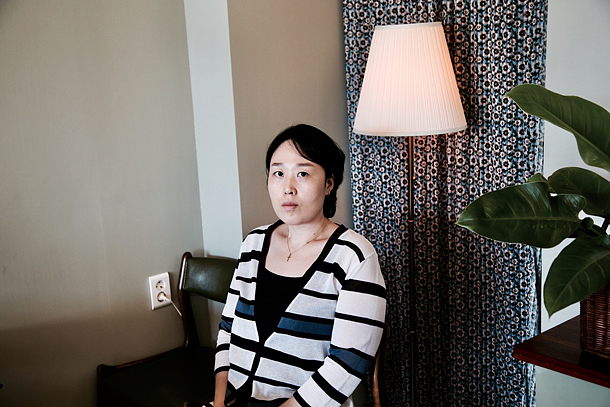 “I want the McDonald’s headquarters in the U.S. to realize what kind of people they licensed to do their regional business in Korea,” says Choi during an interview with the Korea JoongAng Daily on Friday. [KANG JIN-KYU]

It’s also impossible for a doctor to definitively conclude how the illness was contracted.

In a press release released by McDonald’s Korea, the company said it decided on June 2 not to accept Choi’s coverage request because there was “no explanation of cause” for the daughter’s condition on medical certificates submitted to the Korean regional branch by Choi.

Dr. Jeong Hyung-jun, a member of the Association of Physicians for Humanity, told the Korea JoongAng Daily that such a demand is “nonsense.”

“Let’s say a car hit you from behind, breaking your leg. A doctor would then write a fracture of thighbone on the certificate. But would the doctor say the injury was caused by the car accident? Not a chance. Because by definition, medical certificates are to explain medical condition of a patient, not what caused it. They will never write the word “car accident” on the certificate.”

One of the medical documents submitted to McDonald’s states that symptoms began after the patient “had a hamburger” on Sept. 25. It also notes that the patient had been healthy with no medical records prior. On Sept. 30, five days after eating the burger, the girl had a seizure, according the document drawn up by the Samsung Medical Center. But as Dr. Jeong says, none of the documents specifically state that the hamburger was the cause of the illness.

After months of struggle with the fast food chain, Choi decided to take her case to court: She filed a complaint against McDonald’s Korea on Wednesday, claiming irreparable harm was done to her child because of the fast food chain’s mismanagement of its food products.

Her legal battle drew the local media’s attention, who called it a David and Goliath fight: between a stay-at-home mom and a 77-year-old multinational corporation, which in Korea alone has 440 branches.

In response to Choi’s legal action, McDonald’s Korea responded that it found nothing wrong in the production of patties in its Pyeongtaek branch on Sept. 25, citing daily food safety checklists approved by the store manager there that day.

“Store owners or managers write down a food safety checklist and record the temperatures of cooked patties on a daily basis,” said the fast food chain. It went on to say that food safety checklist drawn up on Sept. 25 recorded no problems. “On that day, around 300 of the same products that the child consumed were sold. No complaint or anomaly report was filed (except for Choi’s),” said McDonald’s.

McDonald’s Korea also noted that its Pyeongtaek branch was inspected twice in the wake of Choi’s case by authorities for food safety and hygiene standards: on Oct. 18 and June 20. “No problem was found,” it said.

The company explained that hamburger patties are cooked on a machine called a “grill”, whose bottom plate maintains the temperature of 176.8 degrees Celsius (350.2 degrees Fahrenheit). The top plate is 218.5 degrees. The two plates grill about eight to nine patties at once. 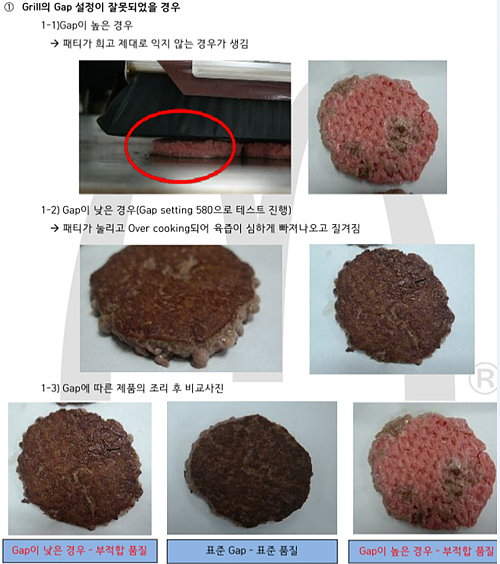 McDonald’s internal document explains how to tell if patties are undercooked or overcooked. Choi and her legal team made public the document. The fast food chain acknowledged to the Korea JoongAng Daily Friday that it is genuine. [CHOI EUN-JOO]

Choi bellieves that while the patties may be cooked with a machine, they still can be undercooked because a worker places them on the grill.

“If patties are not placed on the machine and taken off in the proper order, they can be undercooked,” said Choi. To back up her claim, Choi and her lawyer disclosed McDonald’s internal instruction documents given to employees. On the documents are pictures of patties with captions saying there are “undercooked” because they are placed on the fringe of a plate.

Choi says the documents are proof that McDonald’s is aware of the possibility patties can be undercooked.

When asked by the Korea JoongAng Daily, McDonald’s acknowledged the documents were genuine.

“While we have confirmed no patties were undercooked on that day, we are not saying there has never been a case of an undercooked patty,” an official at Edelman, the PR company hired by McDonald's Korea, told the Korea JoongAng Daily. “While we have had cases of undercooked patties, we didn’t on that day. And in order to prevent undercooking, we give instructions to our employees with such documents.”

Choi said she can’t believe the way the fast food chain has responded to her request over the past 10 months.

“I didn’t ask for money in compensation or anything,” said Cho. “All I asked for was insurance coverage that would cover medical bills for my daughter.”

She said the only people from McDonald’s she’s interacted with were three people working at its call center.

“I asked for someone in charge of cases like mine. They said they were out for business. No one beyond its call center called me, not once. I even asked them if the CEO was briefed on my situation. They neither transferred my call to a higher office nor did a person with a higher position contact me.”

Cho said she even called the U.S. McDonald’s hotline last October, which was no problem for her because she speaks fluent English. “I told the hotline person what happened to my family – without saying it occurred in Korea,” Choi recalled. “She was horrified by my story and said she was very sorry. But after I told her it occurred here in Korea, she said there was nothing she could do as it involved an overseas branch. She told me to get in touch with the Korean branch.”

Choi says she wants McDonald’s Illinois headquarters to know how her case was handled.

“I want the McDonald’s headquarters in the U.S. to realize what kind of people they licensed to do their regional business in Korea.

“There could be countless cases like mine all around the world that have not been reported. I want my case to be a wakeup call for both the public and people working for McDonald’s.”

Choi said her family spent around 100 million won ($86,600) out of their own pocket for bills not covered by her private insurance. “We are in a corner now under deepening financial strain. I might have to sell the house to pay the bills,” said Choi.