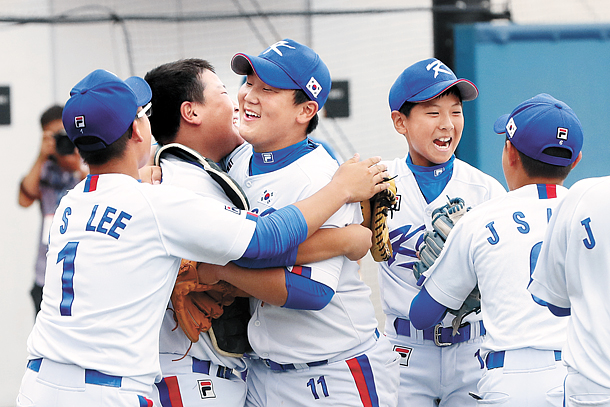 During the final Asia-Pacific regional qualification game for the Little League World Series at Hwaseong Dream Park in Gyeonggi, Ham Yeo-hun, manager of the Korean little league team, told the players to just enjoy the game rather than thinking about the result. Though the players responded with confidence, they still looked nervous.

Despite having already defeated Chinese Taipei 12-0 in the first game of the qualification series, the Korean team got off to a slow start. It wasn’t until the fourth inning, when Chinese Taipei tied the game 1-1, that the Korean team really got into their stride. The game ended with Korea winning 6-1 to earn their berth in the 2017 Little League World Series starting on August 18 in Williamsport, Pennsylvania.

“I’m glad I had the winning hit and I’ll never forget it,” Kim Ye-joon, said. “Now, I really want to win the World Series.”

Kim was the problem solver for Korea throughout the regional qualification games, where he hit a winning home run against Guam in the semi-finals and also led the team to victory against Chinese Taipei with a two-run hit while the bases were loaded.

Not only that, Lee Sung-hyun, son of NC Dinos’ batting coach Lee Do-hyung, also showed great batting throughout the game and Kim Dong-heon extended Korea’s lead while they were already winning 3-1.

After the game the Korean little league team went over to the Chinese Taipei players, who were crying after their loss, and cheered them up. They also took pictures with one another, exchanged gifts and encouraged each other after the game ended.

During the semi-final match of the 2014 Little League World Baseball, one Korean player high-fived Japanese players while running around the field after hitting a home run. The scene showed that little league players play the games for fun, rather than thinking about the results. The Korea Baseball Organization (KBO), on the other hand, has recently been rocked by a match-fixing scandal.

The Little League World Series first started in 1947 with eight regional teams in the United States and eight international teams. Korea has won the event three times, in 1984, 1985 and 2014. Last year the team advanced all the way to the final, but lost to the United States.

The Korean little league baseball Federation was created in 1990 but was not able to provide much support, as they weren’t able to participate in international tournaments due to financial issues.

Though Korea’s little league baseball doesn’t receive as much attention as in the United States, there has recently been a significant improvement in the number of teams, growing from 20 teams in 2007 to 166 teams and 3200 players today.