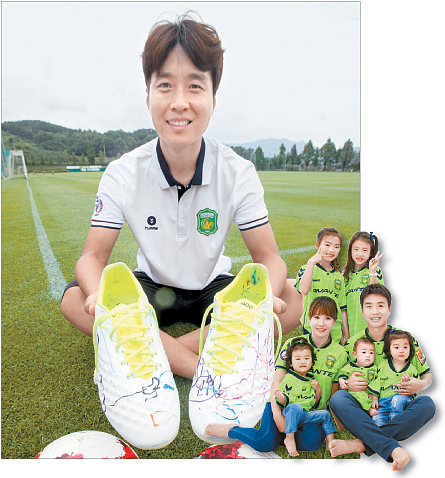 Lee Dong-gook, a striker for the Jeonbuk Hyundai Motors, holds up football shoes with his children’s doodles. On the right is a photo of his family. [OH JONG-CHAN]

Lee Dong-gook, currently the oldest striker in the Korean football league, is only five shy of his 200th career goal in the K League Classic.

The 38-year-old forward, who made his league debut in 1999, has played 451 games across 19 seasons and been with the Jeonbuk Hyundai Motors since 2009 as a striker.

Throughout his football career, Lee has been considered the K League’s top player in history. In 2009, he was the league’s leading scorer, netting 20 goals in 27 matches and helping his team win the AFC Champions League that year. Jeonbuk has topped the K League Classic regular season four times with Lee as the starting player.

This season, however, since he is comparably older than other players, Lee is now playing as a substitute for Jeonbuk rather than a starting player, losing his position to Kim Shin-wook and Goncalves De Liveira Eduardo. 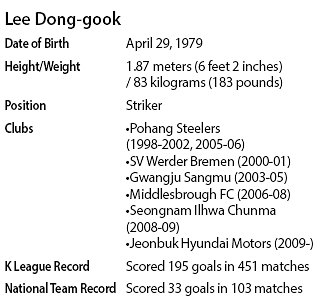 “Aside from the time I played for Middlesbrough FC from 2006 to 2008, my playing time has gotten shorter for the first time,” Lee said. “I’ve played only for 20, 10 or five minutes in a match, and there was a time when the match ended as I was stretching.”

From the significantly reduced playing time this season, Lee thinks he might not be able to score the additional five goals to reach 200 before he retires. For the maturing footballer, his family, he says, is the driving force that has helped him continue.

Lee and his five children have appeared on the popular reality show “The Return of Superman,” where celebrity fathers take care of their children without their mother for 48 hours. During one episode in May, they scribbled on Lee’s football shoes as a present, and the drawings were clearly visible during a match against the Pohang Steelers on June 28. The doodles attracted a great amount of attention, and Lee was able to score two goals during that game to lead Jeonbuk to victory.

“When I first saw the scribbles on my shoes, I didn’t know what to say,” Lee said. “But they did it as encouragement, so now, when I wear the shoes, I think to myself that I’m playing with them. I want to score my 200th goal wearing the shoes.”

Since Lee’s team is based in North Jeolla and his family is in Songdo, Incheon, Lee doesn’t get to spend much time with them. As a professional footballer, Lee is only able to visit them when there aren’t any games scheduled.

The rest of the family is adopting his athletic traits. Lee Jae-ah, his oldest daughter, is a tennis player, and has demonstrated some talent for the game, winning the 10-under national tennis championship in June and July 2016.

“She’s been very aggressive with her play, so now, she’s working on defense,” Lee said.

His second oldest daughter, Lee Jae-si, also plays tennis, though not nearly on the level of her older sister. Still, she has some knack in the sport, and the father hopes one day, the two might be able to compete in doubles at a national championship.