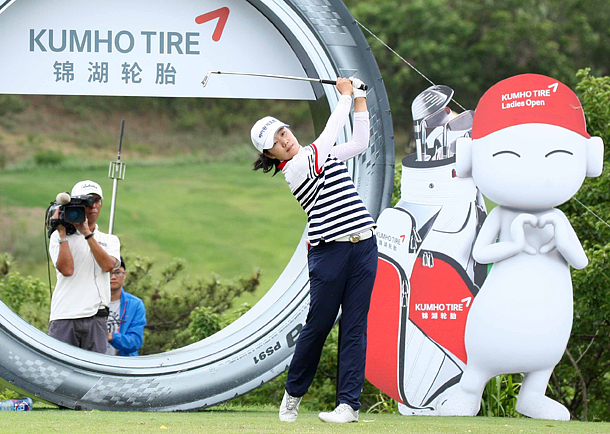 Park Bo-mi defeated Lee Ji-hoo in the first playoff hole, capturing her first KLPGA tour victory at the Kumho Tire Ladies Open at the Weihai Point in China on Sunday.

Park came into the final round one shot behind the leader, Feng Shanshan, at four under par and began her round with three consecutive birdies. Park then made another birdie on the fifth hole to take the lead, but with three additional bogeys on the remaining holes until the 17th, she was one shot behind Lee with one hole remaining.

“When I found out that I had to make a birdie to force a playoff, I told myself to give it my all on the last hole,” Park said during an interview after the round.

Just when she needed it most, Park miraculously made a six-meter (19.7 feet) putt on the 18th to force a playoff. As a result, Park had shot a final round of two under par to finish the tournament at six under par.

And it only needed one playoff hole to determine a champion in this year’s Kumho Tire Ladies Open, as Lee hit her second shot into the bunker to finish with a bogey, whereas Park hit the green on her second shot and two putted from eight meters to win with a par.

“It was the first time playing in a playoff, but I felt relaxed, as I got to play against my friend Lee Ji-hoo, who I’ve been friends with since my amateur career,” Park said during an interview after the round. “And it led to a great finish. Rather than concluding my season with one win, I want to win more events starting now.”

With the victory, Park won 100 million won ($87,000), which is just a little less than her entire tournament earnings from 2014 to 2016, at 115 million won. Aside from the victory, Park set quite a record in the second round, making six consecutive birdies from the par five tenth to the 16th, shooting four under par for the day.

Park turned professional in 2012 and it wasn’t until the 2014 season that she started playing full time on the KLPGA tour.

Prior to the start of the tournament, Park played in a total of 12 tournaments and missed five cuts, ranking 77th in the KLPGA’s 2017 money list. Park’s total earnings for the season are now at 127 million won, putting her at 19th in the 2017 money ranking.

The tournament, co-hosted by the KLPGA and the China LPGA Tour (CLPGA), had quite an interesting field, as the top ten golfers on the money list decided to take a break, but this didn’t make it easy, as Feng, the sixth-ranked player in the world participated.

Feng, who had the lead after the first two rounds, missed her chance of capturing her first KLPGA tour victory by shooting one over par on the final day to finish the tournament at tied for fourth, along with Lee Solar.

Jang Ha-na, who was the highest ranked KLPGA player to participate this week, missed the cut by shooting a total of nine over par in the first two days.

The KLPGA tour players will return to Korea to compete at Caido Ladies Open with TaniCC at Seo Kyung Tani Country Club in Sacheon, South Gyeongsang, starting on Thursday.