Time for a ‘Korean process’

Time for a ‘Korean process’ 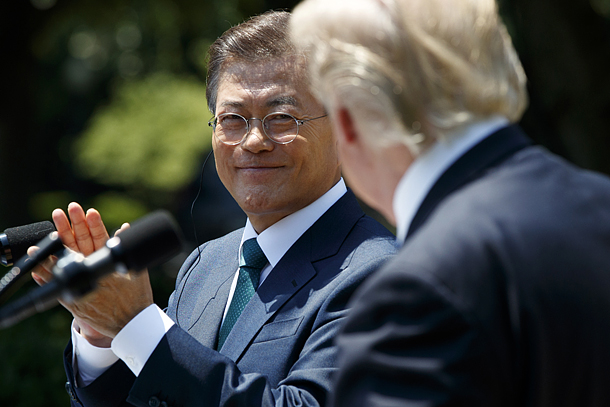 South Korean President Moon Jae-in applauds U.S. President Donald Trump after he delivers a statement in the Rose Garden of the White House in Washington on June 30. [AP/YONHAP]

Today, the world is experiencing a crisis in democracy. The latest is an outcome of fatigue from the fast-paced globalization of the past 30 years and division during the two World Wars and Cold War. As the United States, which voluntarily took the lead in internationalism, has elected Donald Trump, who advocates a nationalistic “America First” approach, the entire world, both developed and underdeveloped, faces a crisis in democracy.

As a divided country since an ambiguous truce after the Korean War, we have had our share of crises as we overcame serious constitutional emergencies, the impeachment of Park Geun-hye and the election of a new president. Meanwhile, North Korea has focused on developing nuclear weapons and missiles as the only way to secure the safety of its regime for the past two decades. It has reached a dangerous stage, bringing South and North Korea and neighboring powers into a nuclear war.

In addition to the inter-Korean confrontation, the seriousness of the Korean Peninsula crisis lies in my ominous prediction that we may be dragged into an unavoidable clash between the United States, the existing hegemon, and China, the emerging superpower. At this juncture, the first summit between U.S. President Donald Trump and South Korean President Moon Jae-in was a significant meeting that will determine the direction and future of the Korean Peninsula and Asia at the crossroads of war and peace. There were concerns over their differences in positions on Thaad deployment and a possibility of misunderstanding. However, it is fortunate — and natural — that the meeting between the two new presidents concluded on a friendly note.

But only three days after South Korea and the United States reaffirmed their commitment to defend democracy and peace in any adversity, North Korea successfully launched an intercontinental ballistic missile, aggravating the situation on the peninsula. Compared to Moon and Trump’s strong warning and UN Security Council sanctions, Chinese President Xi Jinping and Russian President Vladimir Putin’s joint declaration to urge resolution through talks could be seen as some signal of a Cold War 2.0 starting.

Throughout the Cold War, the United States and Soviet Union were able to avert a nuclear war because they shared a mutual understanding that it would bring destruction to humanity. After the Cold War, they recognized China as the only nuclear state in East Asia and have defended peace. But North Korea declared it would become the second nuclear state in the region and sought to go down the atomic path. China is the only neighboring power that can foil that ambition, but it seems to lack intention or capability. As a result of the strategic ambiguity, a Cold War 2.0 between the United States and China and a nuclear war sparked by North Korea are becoming real possibilities.

South Korea is a nation that pursues peace, coexistence and co-prosperity based on its geopolitical conditions and cultural traditions. Therefore, it is focused on continuing its special alliance with the United States, which promotes democracy and internationalism, and nurturing mutually friendly relationships with all Asian neighbors and the global community. As international relations become tense, South Korea and the United States will defend democracy that values people the most, seek the path of internationalism and block war, especially a nuclear war. With this ideal, the alliance is going strong.

When President Trump leads the United States as the front-runner of peace-defending internationalism based on the principle of reciprocity and President Moon shows understanding toward North Korea and advocates becoming a partner with all neighbors including Pyongyang, it will be an opportunity to bring new vitality to democracy in crisis. A crisis can become an opportunity. Just like the “Helsinki process,” the starting point of establishing a peaceful system in Europe during the late 1970s, now is the perfect time to launch a Korean counterpart in Asia, with South and North Korea, the United States and China as the main players.