How Bosch keeps up in a fast-changing market

How Bosch keeps up in a fast-changing market 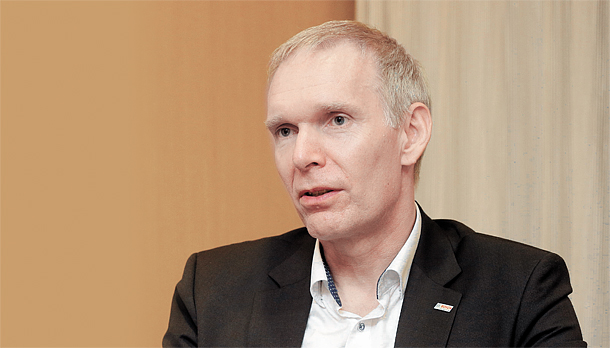 Frank Schaefers, president of Robert Bosch Korea, says the auto parts supplier is transforming at a “remarkable speed” that he has not experienced before in his 25 years with the Germany-based company.

These changes include not just external ones like an evolving product portfolio and faster factories but also internal changes like more employees working away from the desk and increasingly flexible attitudes about interactions among the corporate ranks.

“It is a transformative time for the company,” Schaefers said in an interview with the Korea JoongAng Daily on June 27.

In the market, he said, Bosch is trying to lead innovation and build an image as an ideal electronics company. Meanwhile, within the company, Schaefers said he is working to introduce more “progressive elements” to office culture and move away from traditional management styles by granting more flexibility to employees.

Schaefers has been serving as head of Bosch’s Korean operation since January 2015. That year, the local unit made an operating profit of 2.2 trillion won ($1.9 billion), an annual growth rate of 6 percent. The following year, it made 2.3 trillion won. Schaefers considers this under-1 percent growth to be “stable” but hopes to achieve 3 to 5 percent growth next year. Instead of making aggressive investments of numerical scale, he said, this year will be more about learning and adapting to a fast-changing auto parts industry.

“As an automotive and manufacturing company that has been around for so long, we also have to learn and get used to it,” he said. “It is not as predictable as 30 years ago, and we have to respond quicker.”

One way Bosch is trying to stay relevant in the industry is by implementing smart factory elements as represented by sensors and IoT networks at its assembly line in Daejeon. The system can track work flow in real time and quickly identify faulty products. The automated production process promises to make the job of factory workers easier and improve the end product.

Schaefers envisions such systems will eventually be capable of producing individualized products at the cost of mass producing the same product, and he believes the transition to smart factories can be done in a natural and gradual way.

“The transformation doesn’t need big money,” he said. “It can start by having small sensors, four or five of them, which can measure temperature and vibration. Then you need to connect them to software called a gateway. Then you have the data from the machines which can be 60 years old.

“Once you start analyzing data and see statistics and correlation, you are already in Industry 4.0,” he said, referring to an industry trend of incorporating automation and data analysis into manufacturing.

For a company like Bosch with a long legacy in power tools and auto parts, being a leader in innovation is no easy feat. Schaefers conceded there were some areas in which Bosch could not be the best in the field.

“That is why we do global partnerships,” he said. “We focus on what we do best and what we want to do best. And for areas that are complementary for successful products, we go for partnerships to provide good solutions.”

Bosch is currently working with Baidu, Daimler and Nvidia among other companies to develop self-driving vehicles. Schaefers said Bosch Korea does not have plans yet to partner with companies in Korea, but the possibility is always there. “Strong players are there - we are currently looking at the options. The decisions are made on a global level, not locally.”

On the ground, employees at Bosch Korea have welcomed the changes that Shaefers has brought to the work environment. He did away with the hierarchical system ubiquitous in many Korean offices and got rid of designated seats for employees. The corner office is completely covered in clear glass, sending a message of transparency from the top.

“For more ideas, more room to make one’s own decisions without reporting to the boss all the time is needed,” Shaefers said. “This is not always pain-free because for leaders, it means giving up something. But I think from a management point of view, it is a fascinating challenge to find the right pace that sends a message that we are changing into a new working culture but in an acceptable manner.”