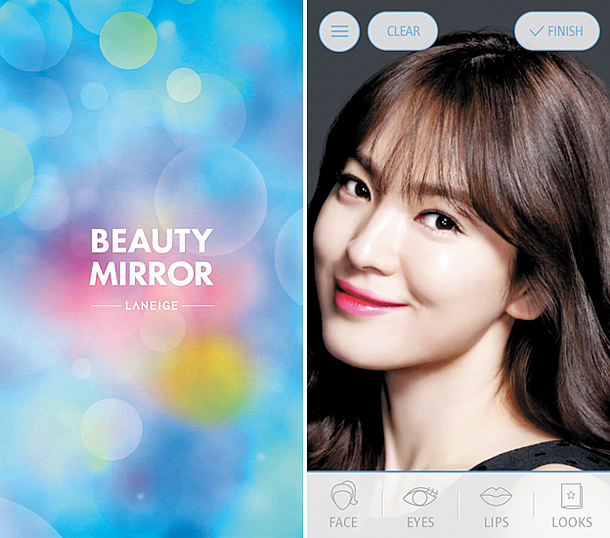 Screen captures of Beauty Mirror, AmorePacific’s makeover simulation app. The app can imitate the makeup of actress Song Hye-kyo and virtually apply it to users of the app. [AMOREPACIFIC]

Among local companies, AmorePacific has been most active in developing marketing gimmicks using this technology. The company released an augmented reality app, Beauty Mirror, in 2015 as a mobile app and at its in-store kiosks.

Beauty Mirror virtually applies cosmetics from AmorePacific’s cosmetics brand Laneige, including skin foundation, eye shadow and lipstick, on the user’s face. The image produced is a live video so customers can move around with the virtual makeup and see how it looks under different light.

L’Oreal released a similar app called Makeup Genius in 2014 and was one of the first big cosmetics manufacturers to do so. In its first two years, the app was downloaded more than 20 million times. The technology is based on the kind developed by Toronto-based firm ModiFace, which has worked with over 70 beauty companies including big names like Sephora, L’Oreal and Urban Decay.

ModiFace is a business-to-business company that powers most of the makeup simulation apps on the global market. It developed technology to precisely detect facial features and movement, and created an algorithm that can determine how makeup should be applied to faces based on photos of models.

“What we find is people spend a lot more time when there’s an AR experience,” ModiFace CEO Parham Aarabi said at last year’s Augmented World Expo. “If you add [AR] mirrors to your store settings, people are more attracted to it, they do spend more time, they feel more confident about the product and they buy more. So really in the beauty industry, AR has a very clear business case.”

In plastic surgery, the AR pioneer is Switzerland-based Crisalix. The company’s software provides 3-D simulations of a wide range of enhancements including Botox, nose jobs and breast implants.

The simulations are based on photos of the patient’s body taken from different angles, and they can be produced with different variables. For example, patients seeking breast enlargement can set the shape and size of implants. The service is useful for doctors when they are consulting with patients on procedures.

According to the Crisalix website, 1,947 surgeons worldwide use the company’s service.