Naver and others seek more AI professionals from abroad

Naver and others seek more AI professionals from abroad 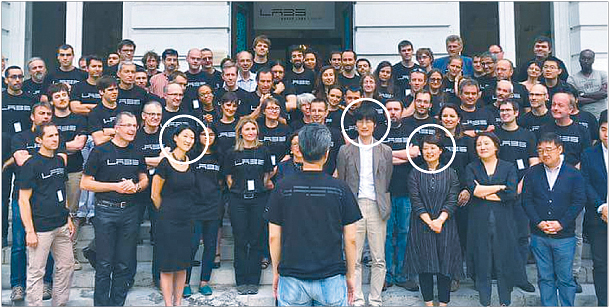 Naver recently held an event called Networking Party in Silicon Valley in the United States. About 100 Korean senior technicians currently working for U.S. IT firms, many in the area of artificial intelligence, were invited to the event.

“We headed overseas since there was a lack of talent in Korea but the situation wasn’t much different,” said a representative at Naver. “But I believe we will be able to attract many global talents if we continue to hold such events and let them know we will enter the global market with the AI technologies.”

This is why Naver invested more than 200 billion won ($173 million), an estimate by the market insiders, to acquire Xerox Research Centre Europe last month. There are some 80 people at the center researching future technologies such as AI. 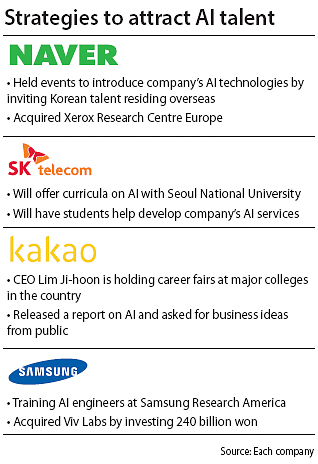 In fact, Korean companies are falling behind U.S. and Chinese firms when it comes to AI.

“Tencent and Google have the world’s best talent - it’s like they have 300 armored battleships, while we only have 10 wooden vessels,” said Lee Hae-jin, chairman of Naver’s board of directors, to its employees recently.

“We are pushing ahead with recruiting talent since taking a leadership role will be determined by how fast we hire talented people,” said a representative at Naver.

Kakao also created a separate link for the recruitment of AI-related employees under its career section. “We plan to accept rolling applications and not to limit how many we will hire for AI-related jobs,” said a representative at Kakao.

SK Telecom plans to help train students using the latest technologies. The telecommunication company recently began offering curricula that will focus on AI with Seoul National University. This was the first time that a company and a college established a class together in Korea. The course will be available for students starting in the second semester of this year. The university will teach theories and information related to AI and SK will give them a chance to develop the company’s AI services.

SK plans to give scholarships to those who perform well.

LG Electronics created AI Lab and Advanced Robotics Lab recently and is working on bringing in more researchers from overseas.

“Companies are having a hard time finding talent since the industry is growing faster than colleges can train students,” said Kim Jin-hyung, president of the Artificial Intelligence Research Institute, a private Korean think tank. “In the short run, companies and universities should cooperate in training AI specialists by sharing information. In the long run, the government and colleges should work on having AI become a part of the standard school curriculum.”