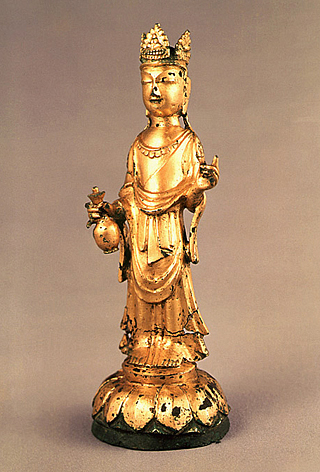 This statue with a height of 20.7 centimeters (8.1 inches) was found in Samyang-dong, northern Seoul, in 1967 and is currently in the collection of the National Museum of Korea.

The bodhisattva wears a crown with three pyramids inscribed with the shape of a Buddha. It has a plump face with a gentle smile, narrow shoulders and a protruding belly. A double layer of robes covers the stomach and legs. Cloth wrinkles are expressed simply with a few lines.

The bodhisattva holds in its right hand a water bottle known as a kundika, which suggests it is the bodhisattva Avalokitesvara. Its left thumb and forefinger are extended outward in a “V” position. The pedestal on which the bodhisattva stands is a lotus flower facing downward. The sharp ends of the lotus flower stand in stark contrast to the statue’s overall soft appearance.

The statue is presumed to have been made in the early 7th century based on the plump body and U-shaped robe. It is associated with the Avalokitesvara faith, prevalent in Korea’s Three Kingdoms Period.