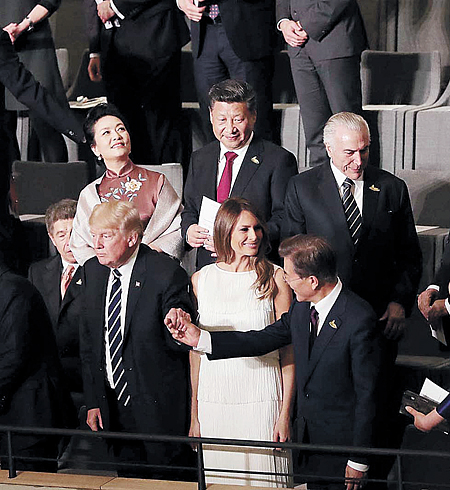 Presidents Moon Jae-in, right, and Donald Trump shake hands at the Elbphilharmonie concert hall in Hamburg, Germany, on Friday, before a concert for world leaders and their delegations on the sidelines of the Group of 20 summit. Chinese President Xi Jinping looks on from behind. [KIM SEONG-RYONG]

President Moon Jae-in highlighted North Korea’s food shortage during a Group of 20 meeting in Hamburg, Germany, on Saturday, calling on the world to provide assistance and separate humanitarian aid from politics when dealing with Pyongyang.

The statement, one of his last in Hamburg before flying back to Seoul, was a clear sign that the liberal-leaning president would stick to his two-track North Korea policy of engagement and pressure despite Pyongyang’s recent launch of an intercontinental ballistic missile.

Moon has vowed to push the regime into giving up its nuclear weapons while seeking dialogue and promoting cooperation at the private-sector level.

“Humanitarian assistance [to North Korea] in the medical sector shouldn’t hinge on the political situation,” Moon said, referring to a UN report saying 41 percent of the North Korean population is malnourished and 28 percent of children under 5 go hungry.

The Blue House, the residence of the president, said Moon urged G-20 members to pay close attention to South Korea’s efforts to monitor the situation in North Korea with the help of global organizations and civic groups and to offer support within the bounds of international sanctions against Pyongyang.

Moon is scheduled to arrive in Seoul today after spending five days in Germany, his second overseas trip as president after visiting Washington for a summit meeting with President Donald Trump. Moon had left the country last Wednesday saying he was “heavy-hearted” in reference to an intercontinental ballistic missile launch by North Korea the day before.

How much the missile test influenced Moon’s remarks at the G-20 meeting is unknown, though his aides have admitted that a speech he gave at the Koerber Foundation in Berlin on Thursday was revised following the launch.

In the speech, Moon condemned North Korea’s missile test and said he did not want Pyongyang to cross a “bridge of no return,” though he refrained from specifying any sort of red line.

Moon Chung-in, a Yonsei University professor who serves as national security adviser to President Moon, dismissed the need to draw any red lines when dealing with North Korea last week during a seminar in Seoul, saying it would stain South Korea’s credibility if it failed to respond as it said it would or lead to devastating results if it did.

During his speech at the Koerber Foundation, President Moon spared no time laying out a rosy future for both Koreas, saying he hoped to resume dialogue with Kim Jong-un “anytime, anywhere” if the conditions were right; hold a reunion for families separated by the Korean War; and replace the armistice that ended fighting with a formal peace treaty, all offers that North Korea has previously rebuffed.

With the UN Security Council set to introduce a new round of sanctions on North Korea, which the South Korean government will likely back, Moon’s prospects for warmer ties with Pyongyang will face another hurdle.

A government official accompanying Moon in Germany said on background Sunday that an oil embargo was “seriously being discussed” in the Security Council.

A complete halt to coal shipments is also under consideration.

U.S. Secretary of State Rex Tillerson, during a briefing Saturday in Hamburg after Trump spoke with his Russian counterpart Vladimir Putin on the sidelines of the G-20 summit, called on China to act more aggressively on the North Korea issue and blamed Beijing for its lack of consistency.

“China has taken significant action, and then I think for a lot of different reasons, they’ve paused and didn’t take additional action,” Tillerson said, according to Reuters.

Tillerson rejected Beijing and Moscow’s proposal for the United States and South Korea to suspend their joint military drills in return for a freeze on North Korea’s weapons testing, saying the North’s programs have already reached a high level of capability.