Three years on, Soyosan park is still just an idea

Three years on, Soyosan park is still just an idea 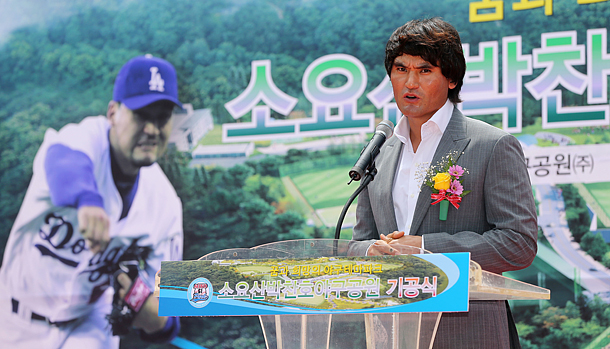 Now, construction remains incomplete and the banners that once promoted the stadium are nowhere to be seen.

“I had high hopes for improvements to the local infrastructure, employment prospects and for property values to increase when the Park Chan-ho Baseball Stadium was constructed,” said Yong Un-seon, a 60-year-old villager, “but I’m concerned since it’s in the third year now with no progress.”

The Park Chan-ho Baseball Stadium was originally intended to be a 79 acre (3.44 million square feet) facility with 2,000 seats, batting cages and five practice fields ? all for an estimated 33 billion won ($29 million).

But after Gyeonggi, Dongducheon, Park and Soyosan Baseball Park (LLC) came to an agreement in February 2013, nothing has happened since, other than the July 2014 groundbreaking. The licensee neglected to pay the legal performance bond and as a result approval for the plans was canceled.

“Once we get approval,” said Joo Gyeong-seong, vice-president of Soyosan Baseball Park (LLC), “the facilities will be completely finished one year after the start of construction.”

“When the baseball stadium is constructed, the city’s course of action is to administratively support it because it will be a boon for the region’s economy,” said Yeo Un-seong, head of the investment attraction team for the Dongducheon City Government. 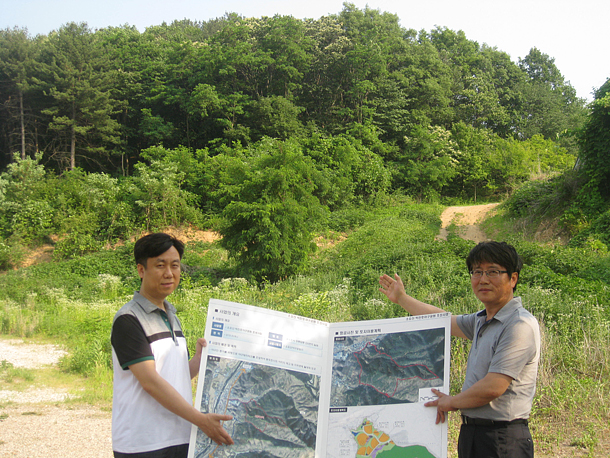 Other ventures named after celebrities include Daegu’s Kim Gwangseok Street, which has received positive feedback, and Incheon’s Ryu Hyun-jin Baseball Stadium, which has been stalled now for its fourth year. The agreement made between the city of Incheon and the pitcher stipulated that the city would provide the construction site, including the construction subsidies, while Ryu was to extend his help as a benefactor in children’s baseball and scholarships. Incheon City bought the requisite land, but the Board of Audit and Inspection said in 2013, “Except for a rugby stadium and gymnasium, the rest of the land was bought at an excessive cost.”

It advised, “Do not construct a sports park.”

In another instance, Cheongju, North Chungcheong, similarly has plans to construct a theme park at Su-dong, Sangdang District, prominently featuring the works of novelist and screenwriter Kim Soo-hyun, a native of Cheongju. After setting a plan in the first half of the year, the city is aiming for completion by June 2018.

Dalseong County, Daegu, is another example as it spent an estimated 6 billion won last year for a 162 acre park bearing singer and entertainer Song Hae’s name. Up until the end of next year, Dalseong County will spend an additional 3 billion won and has plans for a musical fountain and plaza.

“Roads and places appropriating famous people’s names will bind construction businesses with local communities and give economic support for tourism in the area,” said Im Sung-bin, professor of public administration at Myongji University. “But when there is an inadequate relationship with the area, this acts as a negative influence on identity and can be a budgetary and administrative waste, so it must be pushed ahead with caution.”