Kim Sei-young hits another snag in a tough LPGA season

Kim Sei-young hits another snag in a tough LPGA season 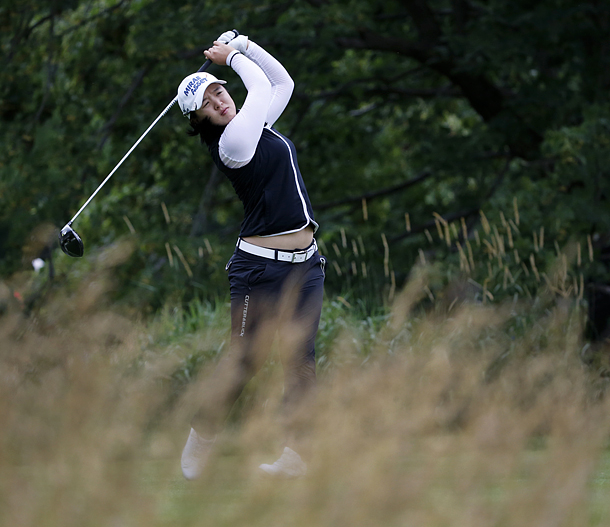 Kim Sei-young during the final round of the Thornberry Creek LPGA Classic in Oneida, Wisconsin, on Sunday. [AP/YONHAP]

Korean golfer Kim Sei-young, who has had an uncharacteristically inconsistent season in the LPGA, made another attempt at capturing a title at the Thornberry Creek LPGA Classic in Oneida, Wisconsin, on Sunday but fell two shots shy of tournament champion Katherine Kirk of Australia and finished third.

In the final round, Kim shot nine under par but started the day far from the lead, tied for 12th and nine shots behind the leader. Still, she hung on to her chances. From the third to ninth holes, Kim made birdies on all the odd-numbered ones. Then, in the back nine, she started with another birdie on the 10th, and on the 13th, Kim shot a 4-meter eagle to give herself an opportunity for a win.

Continuing the momentum, Kim made consecutive birdies on the 14th and 15th holes to share the lead. Throughout the final round, Kim only missed two greens in regulation, three fairways and had a total of 27 putts.

“It was a great day because my shots were solid, and I [didn’t make] any mistakes today,” Kim told the LPGA after the round.

The 24-year-old golfer made her LPGA Tour debut in 2015 after a successful career in the Korean tour, where she won five events. During her first season on the U.S.-based tour, Kim won three tournaments to earn the LPGA Tour’s Rookie of the Year award.

Following a successful first year, Kim notched two additional titles in the 2016 season, and this year, she has already won one tournament, the Citibanamex Lorena Ochoa Match Play in Mexico City. While Kim has earned six trophies in her three LPGA Tour seasons, she has yet to win a major tournament.

Since topping the Citibanamex Lorena Ochoa Match Play in the first week of May, Kim has been unable to maintain her momentum, putting out mediocre performances that have forced her to withdraw from tournaments.

But starting from the KPMG Women’s PGA Championship last week, Kim seems to have caught her stride, recording her fifth top-five finish of the season.

While the Thornberry Creek LPGA Classic was a letdown for Kim, it was a comeback for Kirk, who earned her first LPGA trophy in seven years and just her third victory on the tour.

Kirk won the tournament with 22 under par. Heading into the final hole, she was tied for the lead with Ashleigh Buhai of South Africa, where she finished with a birdie and hoped for a possible playoff. But Kirk didn’t let that happen, as she, too, concluded her round with a birdie.

“To make that putt was huge,” Kirk told the LPGA after the round. “All wins are good. Winning out here is hard, and it’s gotten a lot harder since I first did it, that’s for sure.”

After Kim, Ji Eun-hee has the second-best finish among Korean golfers, finishing tied for 15th at 14 under par. Her compatriot Chun In-gee finished 27th at 12 under par.

Starting Thursday, all of the world’s top golfers will head to Bedminster, New Jersey, to compete at the U.S. Women’s Open at Trump National Golf Club. All rounds will be aired live on the JTBC Golf Channel, an affiliate of the Korea JoongAng Daily.