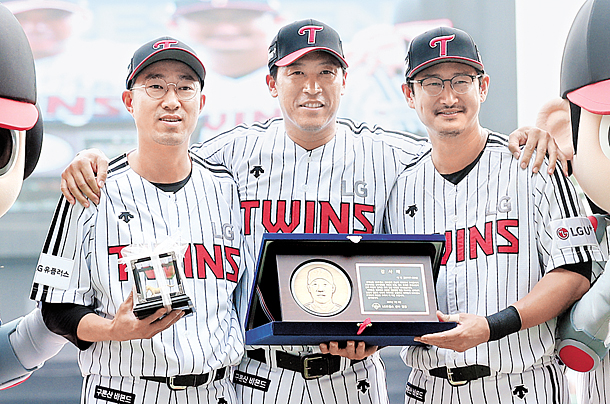 From left, Jeong Seong-hoon, Lee Byung-kyu and Park Yong-taik of the LG Twins takes a picture with an appreciation plaque at Lee’s retirement ceremony during the Twins’ game against the Hanwha Eagles at Jamsil Baseball Stadium on Sunday. [YANG GWANG-SAM]

Lee Byung-kyu of the LG Twins has concluded his 20 year baseball career with a retirement ceremony before the start of the game against the Hanwha Eagles at Jamsil Baseball Stadium on Sunday.

Since fans will no longer be able to watch Lee play, the Twins commemorated his time with the team by hanging his uniform near first base. Following Kim Young-soo, who won the Korean Series MVP in 1990 and 1994, Lee’s number nine became the second number the Twins have retired.

“It’s been a while since I last wore the uniform,” said Lee, who hasn’t played for the Twins this season. “I always wanted my number to be the retired number following Kim Young-soo. So I am honored.”

Originally, the Twins planned on having his retirement ceremony on Sept. 9 to give more significance to the number nine, but Lee declined as the Korean Baseball Organization (KBO) gets more competitive near the end of the season. The ceremony was rescheduled to Sunday and Lee got on the pitching mound to make his ceremonial pitch with his son as the ceremonial batter.

“Since I’ve been in the batter’s box the previous 7000 times, I wanted to stand on the mound,” Lee said.

Lee, who is nicknamed the Red Horse, made his KBO debut in 1997 and had a successful rookie season, winning the rookie of the year award with a batting average of 0.305. Aside from the three seasons with the Chunichi Dragons of Nippon Professional Baseball between 2007 and 2009, he has worn the Twins uniform for a total of 17 seasons.

When Yang Sang-moon started managing the team in 2014, Lee’s role decreased significantly. Last year he recorded a batting average about 0.400 in the futures league, but didn’t return to the KBO until the end of the season in October. Lee was highly praised by Kim Sung-keun, former manager of the Hanwha Eagles, as a batter who can hit a batting average of 0.400. Looking back at Lee’s career statistics, he retires with a batting average of 0.311, 167 home runs, 147 stolen bases and a total of 2043 hits.

Though he was an outstanding batter with a long list of achievements, Lee has never won the Korean Series.

“I feel like I’m leaving the players with a heavy duty,” Lee said. “But I hope they get stronger and win the Korean Series, as the fans have been waiting for a long time.”