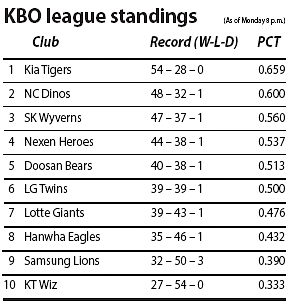 It truly isn’t an exaggeration to say that the 2017 season of the Korea Baseball Organization is the Kia Tigers’ season. On Saturday, the Tigers had a big 20-8 win against the KT Wiz at Suwon KT Wiz Park to extend their lead over the NC Dinos. The Sunday game had to be cancelled at the bottom of the second, with the Wiz up 3-2, due to rain.

With only four more games remaining until the All-star break, the Tigers have been on top of KBO standings for the first half of the season, which has not happened since 2011.

The Tigers have benefitted from their trades, outfielder Lee Myong-ko and catcher Kim Min-sik from the SK Wyverns. Once the two players were traded, Kim Ki-tae, manager of the Tigers, registered their names to the KBO right away and they have filled the gaps in the team’s performance.

The Tigers are expected to improve from this point, as Yoon Seok-min, the Tigers’ ace pitcher, will be making his return.

“After the All-star break, Yoon Seok-min will be in our starting rotation,” Kim said.

At the other end of the country, the Dinos finished their three game series with a 9-4 win against the Doosan Bears in Changwon on Sunday to get themselves out of a five game losing streak. In Daegu the Samsung Lions defeated the Nexen Heroes 7-2 to conclude their weekend series with one win and two losses.

In Busan, the SK Wyverns had a 6-0 win against the Lotte Giants. Despite a scoreless loss, the Giants still won the weekend series by winning the first two games.

After a rain cancellation on Friday, the LG Twins concluded their weekend series with a win and a loss against the Hanwha Eagles. The game on Sunday was delayed by more than two hours due to rain and didn’t start until 8:30 p.m. 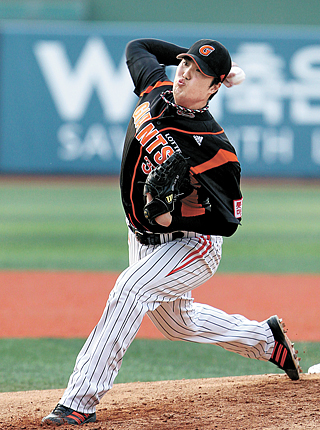 Jo Jung-hoon, a right handed pitcher for the Lotte Giants, returned to the KBO after seven years of rehabilitation treatment during the game against the SK Wyverns on Sunday.

Jo appeared in the game in the eighth inning, while the Giants were losing 6-0, and pitched a scoreless inning while striking out two. This was Jo’s first appearance at the Sajik Baseball Stadium in 2,583 days, since a game against the Hanwha Eagles on June 13, 2010.

Jo had to undergo three elbow surgeries over the last seven years. After the second surgery in 2015, Jo appeared at the Spring Training Exhibition games for the first time in five years, but failed to get into the final roster.

In January 2016, Jo left to Japan for a third surgery and Giants’ fans began to doubt they would ever see the pitcher again.

“I would like to thank the Giants fans for continuously cheering me up for the past seven years and the coaches that helped me through the rehabilitation process after my surgery,” Jo said.

Jo made his KBO debut in 2005 with the Giants and it wasn’t until the 2009 season that his ability was recognized. During the season, he pitched a total of 182 innings and recorded the highest number of wins.

Jo’s arm wasn’t able to handle the sudden increase in innings and he was forced to stop playing shortly afterward.

Although Jo hasn’t made an appearance for the Giants in the regular season for seven years, he has spent some time playing for the Lotte Giants futures league team.

Starting today, the Giants will be playing a three game series against the Hanwha Eagles at the Daejeon Hanbat Baseball Stadium.