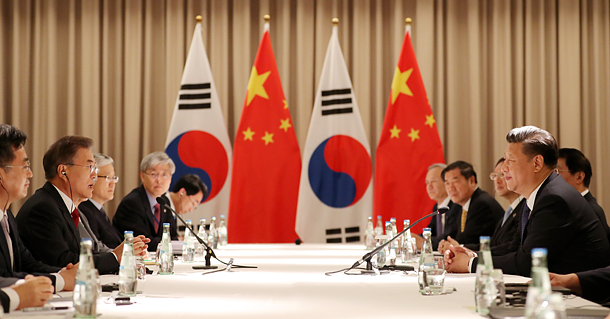 South Korean President Moon Jae-in has his first meeting with Chinese President Xi Jinping in Berlin on July 6, on the sidelines of the Group of 20 summit in Germany, to discuss the Thaad deployment and other bilateral issues. [JOINT PRESS CORPS]

The streets of Hamburg were roiled with nasty scenes as anti-capitalists threw smoke bombs and Molotov cocktails at armored police, who fought back with tear gas and water cannons as leaders of the Group of 20 arrived for their annual summit. Banners proclaiming “Welcome to Hell” greeted U.S. President Donald Trump and other leaders and were reported by the media covering the ceremonial meeting of global leaders.

Moon Jae-in, the new president of South Korea, received as much attention as Trump in his debut on the stage of multipartite diplomacy. The media reported Moon’s overture to North Korea, stating clearly that Seoul does not wish for the collapse of Pyongyang’s regime. He was more positively received at the G-20 than he was in the United States.

After returning to Seoul, Moon will have a price to pay for his high-stakes debut on the U.S. and European stages. First of all, he will have to balance his contradicting promises to Washington and Beijing. In his meeting with U.S. congressional leaders in Washington, Moon assured them that his new government was not reversing the decision to deploy the Terminal High Altitude Area Defense (Thaad) system and that the environmental assessment won’t delay its full deployment.

To Chinese President Xi Jinping, whom he met separately in Berlin on his way to Hamburg, Moon said something different. Emphasizing that the missile shield was brought in because of North Korea’s nuclear and missile provocations, he said that Seoul would be looking into other options to solve the predicament during the time it has bought with the environmental evaluation.

Moon argued to the U.S. congressmen that the environmental assessment was a necessary procedure before the Thaad installation and then plainly admitted to Xi that the purpose of the evaluation was to buy time until Seoul finds a better solution. U.S. officials were assured that the environmental assessment won’t affect the original timetable for the full deployment of the antimissile system, while Xi was told otherwise. Moon’s words could certainly be questioned by Washington.

Moon has indicated to Beijing that Thaad would no longer be necessary if North Korea’s nuclear threat was removed. North Korean leader Kim Jong-un tested an intercontinental ballistic missile capable of reaching U.S. territory on the eve of the Fourth of July holiday. Few Chinese believe Kim would suddenly turn soft and embrace Seoul’s proposal for reconciliation and dialogue. Xi reportedly told Moon that China has a “blood alliance” with North Korea. He stressed that Beijing would side with Pyongyang regardless of its unruly ways. Beijing would have been hardly impressed by the South Korean president’s connecting of Thaad with the North Korean nuclear problem.

Moon’s aides can congratulate themselves for their cleverness of circumventing awkward moments during his summits with the U.S and Chinese leaders. But Moon risks losing credibility with both the U.S. and China. Whether he truly believes he can come up with a different solution to the North Korean nuclear problem by the time the environmental assessment ends, he has played a high-stake gamble with both Washington and Beijing.

Moon should be credited for optimism and goodwill in persuading the two global powers. But that could also seem like naivete on the international stage, where good intentions count for little and only results matter.

The Thaad deployment has become a central issue in the struggle between the strategic interests of the U.S. and China. Moon should have dealt with the matter based on principles. He could have earned more respect if he straightforwardly told Xi not to meddle in South Korea’s sovereign decisions.