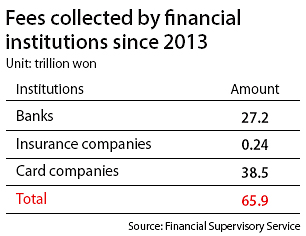 The amount of money that financial institutions in Korea have earned from commissions and fees during recent years has come under scrutiny after President Moon Jae-in pledged to make changes during the presidential race.

Since 2013, financial institutions operating in Korea - banks, insurance companies and card companies - raked in about 66 trillion won ($57.4 billion), according to data from the Financial Supervisory Services, the nation’s financial watchdog.

“Financial companies raised their fees and charges as it got harder to make profit from interest due to low interest rates,” said Park Yong-jin, a lawmaker of the ruling Democratic Party in a report. “The financial authority under the Park Geun-hye administration also argued that fees and insurance premiums should be decided by market principles [which allowed companies to raise charges at their own discretion].”

The lawmaker, however, said the Moon administration will not let the market decide on its own, hinting at the possibility that the government might intervene to limit the level of commissions charged by financial companies. During the presidential campaign, Moon promised to lower the premium on health insurance.

The advisory committee for state affairs planning, a de facto transition team under the Moon administration, reportedly came up with a policy plan to realize the pledge the president made. The report from Park’s office said the financial authorities of Korea - the Financial Services Commission and FSS - are considering the implementation of a screening policy to review fees and commissions charged by financial companies to “relieve consumers of burdens and bolster transparency.”

“Excessive fees charged by financial companies are often highlighted as an issue, but they are still relying on them to reel in large amounts of profit from their customers,” said the lawmaker. “We need to see if the current structure, set up not just by insurance and card companies but also by banks, is reasonable.”

A spokesperson from the FSS, however, said legislation amendments must be implemented before the financial authorities can actually examine related policies in detail.

“We can supervise [the companies] if certain types of fee are deemed as harmful to the consumer [rights] or potentially socially problematic,“ said a director from FSS’s bank supervision department. “But they are extreme cases. Normally it is difficult for us to decide when to intervene [without a set policy].”

There are some experts, however, that refuted the allegation that companies are charging unfair fees. “Major banks in the United States, England and Japan are charging similar or higher fees than Korean companies,” reported Kim Woo-jin, a researcher at the Korea Institute of Finance.