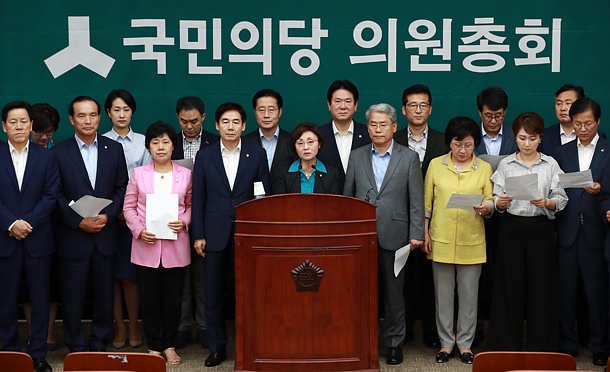 Lawmakers of the People’s Party hold a press conference to urge a fair investigation into a smear campaign after holding a meeting in the National Assembly on Monday. [YONHAP]

Lee Jun-suh, a former member of the People’s Party leadership, was aware that a smear campaign against Moon Jae-in in this year’s presidential election was based on lies but allowed it anyway, the prosecution said Sunday in an application for a pretrial warrant for Lee.

Ahead of the May 9 presidential election, an audio tape surfaced in which a person claimed that Moon’s son Joon-yong landed a coveted job at the state-run Korea Employment Information Service (KEIS) in late 2006 because his father was the senior presidential secretary for civil affairs. While the People’s Party used the information to smear Moon, it did little to help its candidate Ahn Cheol-soo in the election.

An internal investigation by the party concluded earlier this month that Lee Yu-mi, a member of the party, fabricated the phony audio tape.

“The suspect [Lee Jun-suh] was aware that the information regarding Moon Joon-yong was false or could be false, but still colluded with Lee Yu-mi and spread it with intent to stop Moon from winning the election,” the prosecution said in the warrant application.

The People’s Party’s first press conference publicizing the tape was on May 5. According to sources from the prosecution, Lee Yu-mi told Lee Jun-suh the next day that “there was actually no informant.” Lee Jun-suh, however, allowed the People’s Party to hold the second press conference on May 7 to continue smearing Moon. On May 8, Lee Yu-mi told Lee Jun-suh that she was terrified and she wanted to stop. He did nothing, the prosecution said.

According to prosecutors, Lee Jun-suh also promised Lee Yu-mi a good future in the party. “If this goes well, I will help you become the youth committee head of the People’s Party,” he was quoted as telling her by the sources. “The youth committee head will be a member of the Supreme Council, and if you become a Supreme Council member, you can easily become a proportional representative.”

After his initial attempt to get a journalist to print the allegations, Lee Jun-suh offered it to the party on May 4. “I cannot reveal the identity of the informant, but I will vouch for it,” he told the campaign.