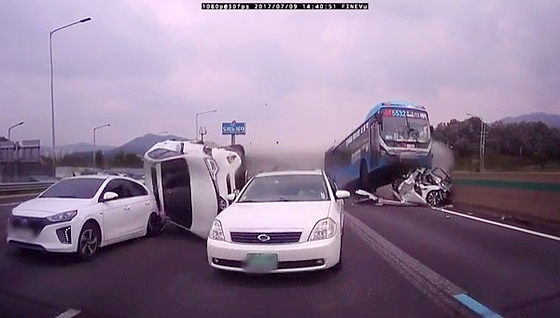 An M5532 bus traveling from Osan, Gyeonggi, to Sadang Station in southern Seoul, crashes into several cars on the Gyeongbu Expressway near Wonji-dong, Seocho District, southern Seoul, on Sunday, killing two and injuring 16. A total of eight vehicles, including the bus, were involved in the accident. [SCREEN CAPTURE FROM YOUTUBE]

A bus accident on the Gyeongbu Expressway near Seoul involving eight vehicles killed two and injured 16 on Sunday.

The bus driver told police he dozed off while driving.

A bus carrying three passengers was driving on the Gyeongbu Expressway, in a middle lane of a five-lane highway on Sunday afternoon. The inter-city bus, the M5532, travels every half hour from Osan, Gyeonggi to Sadang Station, southern Seoul.

Black box footage from the bus obtained by police shows the bus crashing into a white car ahead of it at around 2:40 p.m., and then hitting at least two more cars ahead of it before coming to a halt in the far right lane of the highway.

A total of eight vehicles were involved in the accident, which took place on a section of the highway in Wonji-dong, Seocho District, southern Seoul.

The white vehicle was crushed by the bus and its two occupants, a couple aged 58 and 56, died on the spot.

The couple worked as tailors in the Dongdaemun District, eastern Seoul. The husband, surnamed Shin, had been receiving blood dialysis. Acquaintances told police that the couple liked to go out for rides together on weekends.

The 16 injured are being treated at a hospital.

The bus driver, a 51-year-old surnamed Kim, told police he had dozed off. Police plan to apply for an arrest warrant for him.

“The driver told us he dozed off while driving,” said a police officer. “There are no skid marks on the road, which rules out the possibility that the accident happened because the bus skidded in the rain.”

Authorities are inspecting black box footage from the bus and other vehicles to determine the exact cause of the accident.

A 6-kilometer (3.7-mile) stretch of three lanes of the highway heading toward Seoul was blocked after the accident, which slowed down traffic in the area until around 4 p.m.

The Act on Special Cases Concerning the Settlement of Traffic Accidents states that “a driver of a vehicle who commits a crime provided for in Article 268 of the Criminal Act by reason of a traffic accident shall be punished by imprisonment without prison labor for not more than five years or by a fine not exceeding 20 million won [$17,385].”