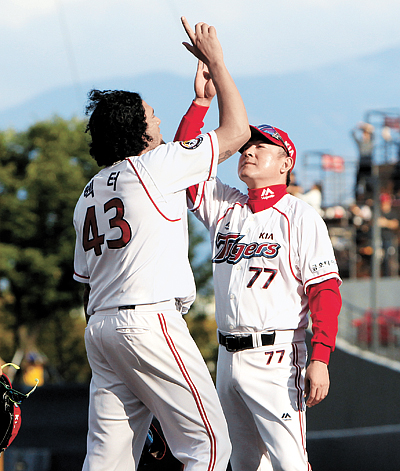 When Kim Ki-tae first got appointed as the Kia Tigers’ manager in 2015, the team was considered one of the weakest squads in the Korea Baseball Organization (KBO). To make matters worse, Kim Sun-bin and An Chi-hong, the Tigers’ leading batters, left the team to complete their military duty.

But rather than strengthening the team by recruiting new players, Kim controversially focused on developing the rookies, aiming for long term success. That said, the Tigers’ 2015 season was quite a struggle. More than half of their lineup was unknown and they recorded the KBO’s lowest team batting average for the season, at 0.251. Despite this awful start, Kim’s goal of winning the regular season never changed.

Unlike other managers, Kim doesn’t use the word “rebuilding” often, since it may sound like he is ignoring the traditions of the team and could translate to a lack of trust between him and the players.

In 2016, only one year later, the Tigers defeated the LG Twins in a wild card game to advance to the postseason and this year, with the addition of Choi Hyung-woo, the Tigers have dominated the first half of the KBO season. The Tigers’ biggest strength this season is their batting lineup, where they are ranked first with a batting average of 0.393 in July alone, as of Monday.

The Tigers’ batting lineup has shown an outstanding ability to hit home runs, leading the team to score two-digit runs in eight consecutive games. Though their scoring streak came to an end on Thursday, they played another great game on Saturday, defeating the KT Wiz 20-8.

“I’m thankful to our manager for trusting me and letting me play in a game, which I didn’t think I would,” Choi Won-joon said.

Many have praised Kim Ki-tae’s leadership for the Tigers’ success. Kim tries to gain the trust of the people around him and regularly gives younger players the opportunity to play.

“You’re going to play about 30 games this season in the KBO and next year, you’re going to have to play in about 50 games or more,” Kim told the rookie players.

If a coach tells Kim that a player is not ready to play in that many games yet, he doesn’t pass them over. Instead Kim sticks with all the players as he believes that they need the challenge in order to improve.

In April, Lee Myung-gi, who was traded from the SK Wyverns, made a significant mistake in defense, but Kim didn’t exclude him from the Tigers’ lineup.

“After the game, I was almost certain that my name would be excluded from the starting lineup,” Lee said. “But rather, [Kim] told me not to be afraid of making mistakes and encouraged me.”

With that, Lee is ranked seventh in the KBO’s batting average at 0.347 as of Monday. It’s not just Lee that got a word of encouragement from Kim. At the beginning of the season, many talked about Rogearvin Bernadina getting kicked off the team due to his poor performance. But once again, Kim encouraged him by sending him videos of Bernadina during his career in the major leagues and gave him words of encouragement through mobile messenger applications. Following Kim’s intervention, Bernadina started producing long hits in June and the Tigers have had all nine batters perform at their highest level so far this season.

His trust in all the players definitely seems to be the motivation behind team’s success.

“Rather than leading the team all by myself, I want the player, staff members and myself to work together as one team,” Kim said when he was appointed in 2015.