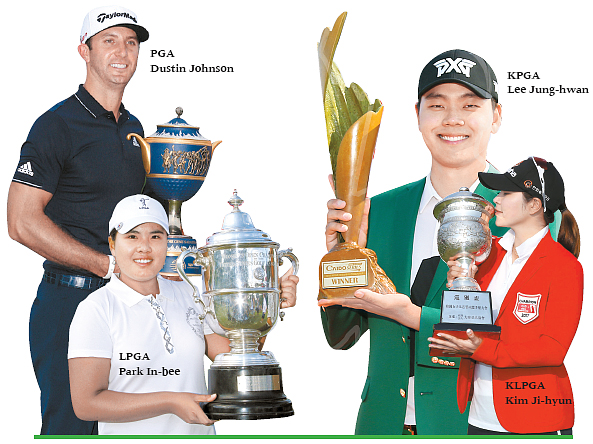 Unlike other LPGA tour events, the Thornberry Creek LPGA Classic didn’t receive much attention from fans, as a lot of top golfers chose not to compete to prepare for the upcoming U.S. Women’s Open in Bedminster, New Jersey, starting on Thursday.

The U.S. Women’s Open is the only LPGA tour event that doesn’t have a title sponsor, meaning it is the only tournament that can be maintained on its tradition and history alone. Aside from the tournament being the biggest event in women’s golf, it has the highest winning purse, which increased from $4.5 million last year to $5 million this year. The KLPGA tour’s Kumho Tire Ladies Open also saw their top players absent from the event, leaving it to the United States to compete this weekend.

Pak Se-ri famously won with a shot from the hazard, after entering the water with her bare feet, and throughout the tournament’s history, Korean golfers have shown well, having a total of seven winning the event eight times.

Professional golfers are, of course, more attracted to tournaments with higher prize money. And this may be the reason why the U.S. Women’s Open is the most favored.

It’s not only the LPGA tour that is increasing its prize money, either. This season, the PGA tour’s total prize money is 418.8 billion won ($363.5 million) and the average prize money per tournament is 8.3 billion won. The PGA tour’s prize is about ten times more than that of the KPGA tour. In fact, when a caddie earns their bonus by having their player win a tournament, they tend to earn more than the player ranked first in the KPGA’s money list.

During the 1940s, Ben Hogan mentioned that the world’s top player’s earning was less than a lesson pro. But with the increased prize money, that is no longer the case, as they can become millionaires just by earning their tour card to the PGA. 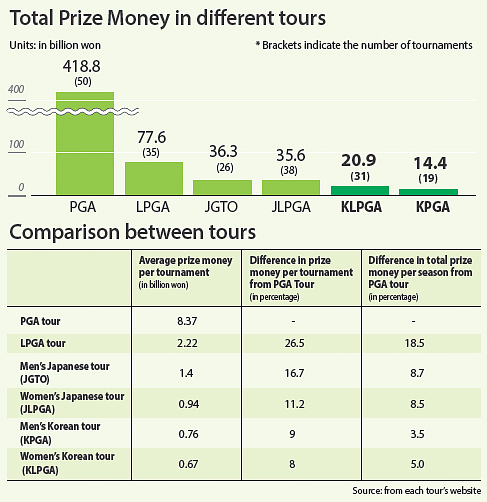 The U.S. Open in June had the highest total purse, 13.8 billion won, which is only 600 million won less than KPGA’s total purse of all 19 tournaments in the 2017 season. Brooks Koepka of the United States won $2.16 million by winning the tournament.

Though the LPGA has significantly increased their tournament purse, it is still less than half that of the PGA tour. But the LPGA has made steady improvements, where the total purse for the season is 77.6 billion won and an average purse of a single tournament is 2.2 billion won.

Last year, Ariya Jutanugarn of Thailand, who was the money leader in the 2016 season, earned 2.9 billion won solely from tournaments, but this is only 27 percent of what Dustin Johnson, the 2016 money leader on the PGA tour, earned. Looking further into Jutanugarn’s earnings in 2016, she has earned as much as 34th ranked player on the PGA tour’s money list.

The KLPGA tour has also made improvements in prize money, increasing from 10 billion in 2012 to 20 billion in 2016, but as players started leaving to play in the United States and Japan, the tour hasn’t made much of an increase this year, and the total prize money is now 2.9 billion won.