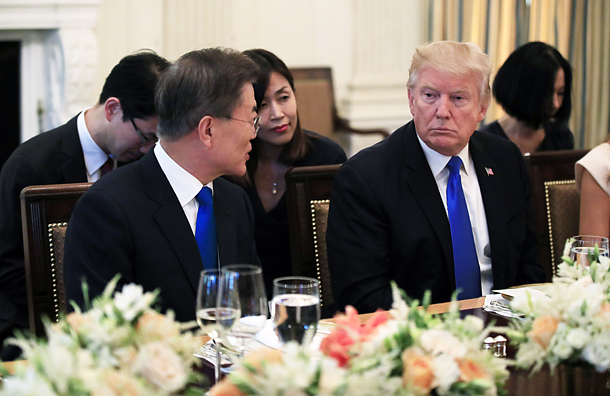 U.S. President Donald Trump listens to South Korean President Moon Jae-in during a dinner in the State Dining Room of the White House on June 29. [AP/YONHAP]

Harry Kazianis, director of defense studies at the conservative American think tank Center for the National Interest, claims it does not take an Oxford or Yale scholar to comprehend North Korea’s national security strategy. The regime can be understood simply by watching The Godfather trilogy.

The Corleone family kills and fights for the survival of the family name and bloodline. The second generation godfather — Michael Corleone — murders his own brother, brother-in-law, and friends who stand in the way. North Korean leader Kim Jong-un emulates the Italian mob’s family doctrine — survival at all costs. He killed his uncle-by-marriage and half-brother. He shuns China, the country’s staunchest ally.

Nuclear weapons play both offensive and defensive roles. Bruce Bennett, senior international defense researcher at the nonprofit RAND Corporation think tank, argues that North Korea seeks to achieve the unification of the Korean Peninsula by absorbing South Korea. Armed with hundreds of nuclear weapons, it will try to pressure the United States to give up on South Korea.

Many might consider the theory bizarre. But bizarre things do happen. People a year ago did not imagine Donald Trump could become the U.S. president. But he did.

The wind is unfavorable for South Korea’s new liberal President Moon Jae-in and his idea that engagement of Pyongyang could talk a little sense into its leadership. North Korea snubbed Seoul’s repeated overtures and conducted missile tests numerous times, including an intercontinental ballistic missile. The latest Group of 20 summit underscored the Cold War-like front between South Korea, the U.S. and Japan and North Korea, China and Russia.

Beijing and Moscow are not likely to dump Pyongyang even if it dares a sixth nuclear test. When Chinese President Xi Jinping met his South Korean counterpart Moon Jae-in for the first time following Pyongyang’s ICBM test, he said that North Korea was China’s “blood” brother. We must not succumb to wishful thinking that Beijing will change.

Do we have a strategy to turn the tide and seize the initiative for a breakthrough based on our solid alliance with the United States?

The first summit between Moon and Trump went relatively well. Luckily or unluckily, Trump does not seem to have much of a plan. Asking Beijing to tame Pyongyang is never going to work. Trump has no reason to stop Moon from trying to find a solution on his own through dialogue. That may be why Trump doesn’t mind Moon telling a different tale to U.S. and Chinese officials about the deployment of the Terminal High Altitude Area Defense (Thaad) system.

Trump, however, won’t be able to maintain his patience beyond the next 100 days. During summit talks in April, Chinese President Xi Jinping asked Trump to give him 100 days to find a solution to the North Korean problem. As the July 16 deadline nears, Trump is beginning to take punitive actions against Beijing.

Trump will show his stiff side if Xi doesn’t come through. Seoul officials should be aware that Trump did not tweet after Moon’s decision to suspend full installation of the Thaad for an environmental assessment upon strong advice from his aids. But some in Washington are already suggesting that the Thaad battery be moved to Japan if South Korea remains unwilling to host it.

In Berlin with Xi, Moon proposed dialogue with Pyongyang despite its ICBM provocation because he is running against a deadline. Seoul has bought time for now. But it is up against the odds as it has not secured the full confidence of its ally or managed to win over Pyongyang. Seoul could soon face a cost for delaying the Thaad deployment: a renegotiation of the bilateral free trade agreement with the United States and increased spending on U.S. troops in Korea.

There is a famous quotation from the Godfather: “Make him an offer he can’t refuse.” If Moon tries hard, he may be able to find a way out of the conundrum.