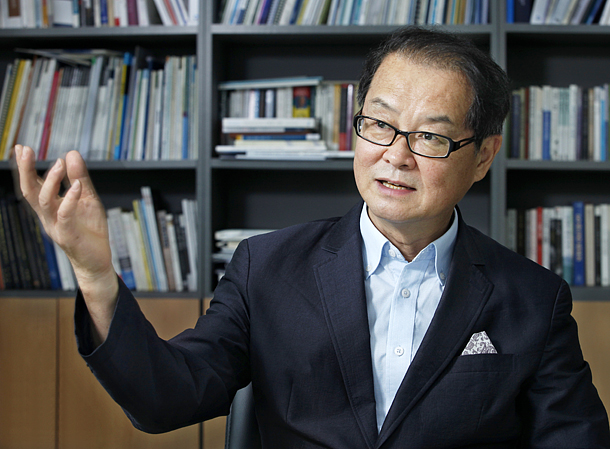 Lee Chong-soo, chairman of Korea Social Investment, discusses impact investment at the office of the foundation in central Seoul on July 5. [PARK SANG-MOON]

Lee Chong-soo, chairman of Korea Social Investment (KSI), maintained a decent living during his 15 year stint at leading multinational banks such as Chase Bank, devoting his career to establishing overseas branches in Cambodia and Indonesia.

But Lee’s outlook suddenly changed in 1997 when he faced a dismal sight at the Phnom Penh International Airport in Cambodia.

As factional fighting between Prime Minister Hun Sen and then-co-premiere Norodom Ranariddh left the country in disarray, frightened Cambodians were lining up to leave.

The fearful eyes and mournful faces Lee witnessed at the airport reignited his passion for helping those in need and making a positive impact on society. 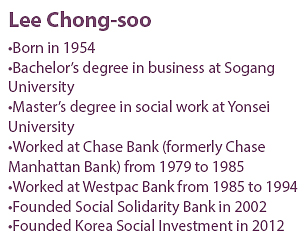 So striking was the scene that he decided to give up his lucrative profession. He decided to utilize microfinance and impact investment to support poor, underprivileged people by establishing the Social Solidarity Bank in 2002 and a charitable foundation called KSI in 2012.

Impact investment, which aims to generate beneficial social or environmental effects in addition to financial returns, has not been as active in Korea as it is in Europe and the United States. But it entered a new phase in May as banking gurus and former finance minister Lee Hun-jai joined Lee’s efforts to invest with a social purpose. In May they formed a committee to launch Impact Finance Korea next month, a private firm that will finance a fund worth 200 billion won ($173.5 million).

The fund will be used to finance social start-ups and manufacturers and, in return, the investors will receive dividends when the businesses turn a profit.

The Korea JoongAng Daily sat down with Lee to discuss his plans for the fund and his vision of social investment.

Q. Why is impact investing important and what made you engage in the area?

A. There are different social problems ranging from low fertility rate, aging population, school bullying and a lack of housing for the poor. But the government is not capable of addressing the problems in an efficient manner. There are different ways to solve the issues, but the complex bureaucracy and political maneuvering will likely get in the way of exploring solutions and choosing the best possible measures. When we invite the private sector to solve challenges there will be more efficiency and transparency.

The reason I work on impact investment is based on my desire to help people in need. As a college student, I was involved in the student protest movements to fight the country’s military regime and even imprisoned for my involvement. But while I worked as a banker I felt my attention to social justice and less-privileged people had faded away. It was at the Phnom Penh International Airport when I encountered depressed people that I decided to follow through with my passion and care for the people.

As you mentioned, numerous social issues exist. Can you pick up several social challenges that you see as the most pressing and have the potential to be resolved with impact investing?

I am particularly concerned about the housing issues. Young newlyweds, students and graduates fresh out of college find it hard to find a good, neat place to live with little money in their pockets. This is why I was involved in different housing projects in cooperation with the Seoul city government at KSI. For example, we created a community for the elderly who live alone by redeveloping a residential area owned by the city.

Another project includes a living space for young artists in Buam-dong, central Seoul. College students who prepare for the public servant exams away from home also have a hard time finding low cost rooms. So, we rented a space in Sillim-dong, southern Seoul, where a lot of students gather. Impact Finance Korea will look for companies that have viable solutions for the lack of housing.

Are there other social challenges or successful examples that you wish to emulate?

The idea of impact investment can be applied in different sectors and through different instruments. In the UK, a social impact bond aimed at reducing former criminals reoffending was launched in 2010. The bond funded a program to reduce recidivism rates among some 3,000 prisoners at Peterborough Prison. They achieved a meaningful reduction through the bond. A similar mechanism can be applied to deal with juvenile delinquents in Korea. But in this system, the government should play a central role to compensate those who invest in social values as was the case in the UK. Tax incentives offered to investors is also a good way to increase the appeal of impact investment. But the role of the government should be limited to fostering investment rather than fund management and choosing the specific start-ups.

I am also passionate about taking care of North Korean defectors and even people in the North after reunification through impact investing, a social issue unique to Korea. I believe that the scope and degree of tensions will be daunting and the government alone would not be able to address all the problems. We could support companies with an aim of helping North Korean defectors or launch our own projects.

The committee, consisting of 10 experts including the former finance minister, started raising funds in May and I am confident we can achieve the target this year. I can’t reveal the investors but many individuals and entities have shown interest. Among them were big finance institutions, tech gurus and angel investors.

The accumulated size of impact investment in Korea stood at 130 billion. Of the funds, the vast majority of them - around 110 billion won - came from the public sector. I think impact investing is a good way for private companies to realize corporate social responsibility.