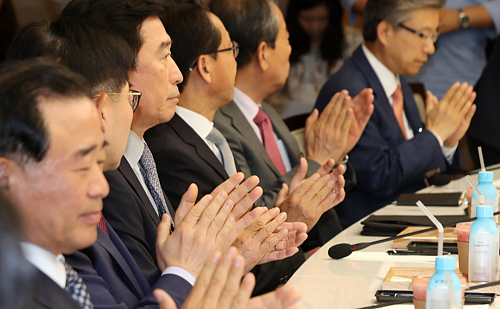 Executives from Korea’s top 15 conglomerates applaud during a meeting at the Korea Chamber of Commerce and Industry headquarters in central Seoul on Tuesday. [YONHAP]

Ahead of their first meeting with President Moon Jae-in, executives from Korea’s top 15 conglomerates gathered on Tuesday to discuss the agenda for the meeting and agreed to focus on social contribution rather than aggressive investment and hiring as they have done under more conservative governments.

The meeting was held at the Korea Chamber of Commerce and Industry in central Seoul and led by Lee Dong-geun, vice chairman of the business lobbying group. The purpose of the meeting was to collect opinions from Korea’s leading conglomerates before the chamber organizes an official meeting between conglomerates heads and the Moon administration.

According to a statement from the Korea Chamber of Commerce and Industry, the conversation centered on how conglomerates could strengthen their work toward societal goals like mutual growth with small businesses and creating sustainable jobs.

“We decided to refrain from competitively releasing investment and hiring plans,” Lee said in a media briefing after Tuesday’s meeting. “Instead, conglomerates will voluntarily promote their cases related to accompanied growth and mutual development. Major companies are often criticized by the public, but they surely contribute to it as well.”

Whenever a new president takes office in Korea, companies customarily race to release their plans to expand investment and hiring. The public has criticized the practice as a knee-jerk PR move to leave a favorable impression on the new leadership. They also say it has pushed companies to needlessly compete with each other and report pie-in-the-sky numbers to outdo their peers.

The Korea Chamber of Commerce and Industry affirmed in a statement that companies would create their social contribution plans voluntarily and in a way that suited each company’s situation instead of doing so competitively or collectively, an apparent reflection of Moon’s more progressive stance on economic and social welfare issues.

The chamber members on Tuesday also discussed the date of the meeting between conglomerate heads and Moon. The meeting was originally expected to take place later this month, but the Korea Chamber of Commerce and Industry said it would likely be postponed to late August.

The group hasn’t officially requested a meeting yet but said it would do so in the near future after it receives sufficient opinion from business leaders on the schedule and agenda.

On reasons for the delayed timeline, the Korea Chamber of Commerce and Industry mentioned the Ministry of Strategy and Finance possibly publishing a new outline for the government’s economy policies at the end of this month and Moon’s summer vacation, which will likely fall in late July or early August.

The business lobbying group ruled out the possibility of conglomerate heads sitting one-on-one with the president, saying it would be a group meeting.