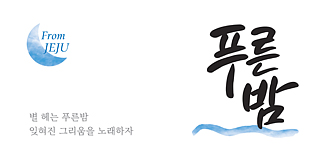 Retail giant Shinsegae is poised to enter the soju market with its new brand Pureun Bam, meaning blue night in Korean, according to the company on Tuesday.

Apart from the logo and the brand name, Shinsegae did not reveal any details of the product including the exact date of release or its price.

A spokesman, however, added that the release was scheduled for fall and that the price will not be far-off its current competitors. “We plan to differentiate the product not by price, but taste,” the spokesman added.

Shinsegae Group acquired Jeju Soju, a local soju brand on Jeju Island, in December last year. The retail giant purchased a 100 percent stake in the company and invested 25 billion won ($21.7 million) into upgrading the production facilities and rebranding the soju as Pureun Bam.

As the facility had only run once or twice a month in order to produce Jeju Soju, an extensive expansion was required to allow for the mass production of Pureun Bam. In terms of marketing and rebranding, Shinsegae changed the name in order to convey the emotional and romantic image that Jeju Island evokes.

Upon release, Pureun Bam will be sent to Shinsegae’s retail arms nationwide, including discount chain E-Mart. The company plans to first establish the brand on its home ground, Jeju Island, by increasing the supply to local restaurants and eateries before tackling markets elsewhere. Before acquisition, Jeju Soju had a market share of less than 1 percent.

In the long run, Shinsegae will bring the product abroad through its foreign E-Mart branches across Asia and partnered retail channels in Japan and the U.S.