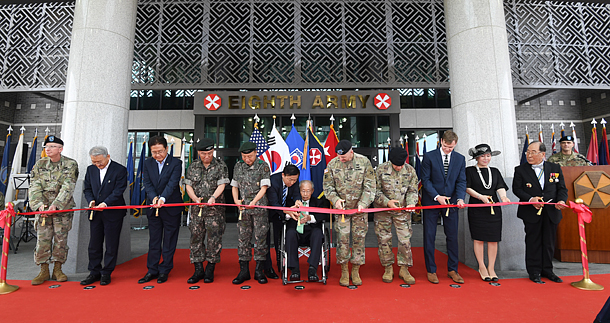 The Eighth U.S. Army on Tuesday held a ceremony to mark the opening of its new headquarters in Pyeongtaek, Gyeonggi, after relocating from the Yongsan base in central Seoul. Yongsan was its base for 64 years.

The opening ceremony was held at Camp Humphreys in Pyeongtaek, the location of the new integrated U.S. military base, and a bronze monument of Lt. Gen. Walton Walker (1889-1950), relocated from the Yongsan garrison, was unveiled at its new home.

Lt. Gen. Thomas Vandal, commander of the Eighth Army, in a welcoming address pointed out that some $10.7 billion was invested in the Pyeongtaek base construction project, and that the Camp Humphreys location has become the U.S. Department of Defense’s largest Army garrison overseas.

He described the project as “the crown jewel of overseas installations” of the Pentagon.

The USFK military base in Pyeongtaek has a total area of over 14.67 million square meters.

It is estimated that over 42,700 soldiers, family members and civilian employees will be relocated to Pyeongtaek by 2020.

Vandal and retired four-star Korean Gen. Paik Sun-yup, who was in a wheelchair, took part in a ribbon-cutting ceremony for the headquarters, which was attended by some 300 U.S. and Korean military officials.

The U.S. Forces Korea’s Eighth Army was located in Yongsan since 1953 following the end of the 1950-53 Korean War.

Vandal said the completion of the project in 2020 will “reflect the enduring commitment of both the ROK [Republic of Korea] and U.S. governments to this great alliance,” he said, adding that it will also enhance the troop’s quality of life, ability to protect and their “readiness to fight tonight.”

He noted that 80 percent of construction has been completed, and that the rest is expected to be completed within the next 18 months. Humphreys’ “state-of-the-art” facilities include barracks, housing for families, schools, a hospital and a runway.

Seoul and Washington agreed to relocate the Yongsan base to Pyeongtaek in 2003 under presidents Roh Moo-hyun and George W. Bush.

There were some 173 U.S. military bases and facilities scattered nationwide, and the relocation project was an attempt to consolidate and integrate many.

The Eighth Army began the move to Pyeongtaek in March and completed it last month, while the U.S. Forces Korea Command will complete its move by the end of the year and the 2nd Infantry Division will relocate next year.

The Eighth Army’s new headquarters is a three-story building that cost 74.5 billion won ($64 million) to construct. The new USFK headquarters next door is set to open at the end of November.

Camp Humphreys in Pyeongtaek, Gyeonggi, is shown on Tuesday morning as the Eighth U.S. Army completes relocating to its new headquarters from the Yongsan base in central Seoul after 64 years. [OH JONG-TAEK]

The move faced delays, but the relocation of the Eighth Army has finally paved way for the start of the Pyeongtaek era.

Korea is estimated to have shouldered around 9 trillion won of the estimated 16 trillion won needed for the relocation, compared to 7 trillion won paid by the United States. It also provided the land in Pyeongtaek.

The Yongsan base will maintain its Korea-U.S. Combined Forces Command building and housing for U.S. embassy officials.

However, vacated land in Yongsan will be returned to Korea, and a portion is expected to be turned into a public park after undergoing an environmental impact study, in accordance with the bilateral Status of Forces Agreement (SOFA).

Residents of Pyeongtaek are looking forward to new life in their city, along with more infrastructure and facilities in the area.

Kwon Yi-hyeok, a 73-year-old manager of a convenience store in Pyeongtaek, said, “While the streets are vacant during weekdays, U.S. soldiers fill the streets on weekends after pay day. I look forward to more customers with the opening of the U.S. Eighth Army headquarters today.”

Lee Eun-woo, head of a societal and economic development association in Pyeongtaek, said, “While some welcome the revitalization of the U.S. military base as an opportunity for invigorating the local economy, there is still a lack of cultural and tourism infrastructure, so only neighboring cities including Suwon, Asan and Cheonan may benefit for now.”

“It’s chaotic because we’re still building streets,” said Kim Jeong-hoon, head of a local merchants’ federation. “Since there will be many U.S. troops and families moving to Pyeongtaek, we are thinking of procuring popular restaurant chains from Itaewon that are frequented by soldiers and thinking of holding various cultural events over the weekends.”