Employment among young is at its worst since 2000

Employment among young is at its worst since 2000 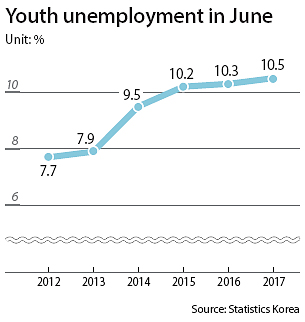 The job situation in Korea is pretty good thanks to a healthy manufacturing sector, with one major exception: young people.

The unemployment rate for job seekers aged 15 to 29 rose 0.2 percentage points from a year ago to hit 10.5 percent, the highest June figure since 2000. Statistics Korea said Wednesday that the unemployment rate reached as high as 23.4 percent if you include young Koreans who are preparing to look for work but have not submitted applications yet, and young people who have given up. That figure rose 1.8 percent compared to the previous year and is an all-time high since the government started compile data in its current form.

The number of unemployed young people rose 65,000 from a year ago to reach 1.07 million in June.

“The number of workers in their 20s, which is the age at which most people enter the labor market, dropped significantly due to a weakened services sector,” said Kim Ie-han, a director at the Ministry of Strategy and Finance.

But for all ages, the number of employees went up by 301,000 in June when compared to the previous year to hit 26.86 million.

For all ages, the unemployment rate rose 0.2 percentage points to 3.8 percent.

“Workers in the construction sector went up the most and the manufacturing sector also improved,” said Kim. “But the increase in workers in services dropped significantly.”

That sector was seriously hurt in the last 12 months by restructuring in the shipping and shipbuilding industries.

The number of workers in services rose 233,000 in May but dropped 115,000 last month. The agency cited weakness in the hospitality and restaurant sectors and transportation-related businesses.

“This was the first time since December 2011 that the number of workers in hospitality and restaurants decreased and it appears that it is due to weakened domestic consumption,” said Kim at the Finance Ministry.

But the supplementary budget, which the Finance Ministry submitted in June, is stuck in the National Assembly.