Couples dance their way to healthier marriages : Husbands and wives learn the art of fun at club formed for them

Couples dance their way to healthier marriages : Husbands and wives learn the art of fun at club formed for them 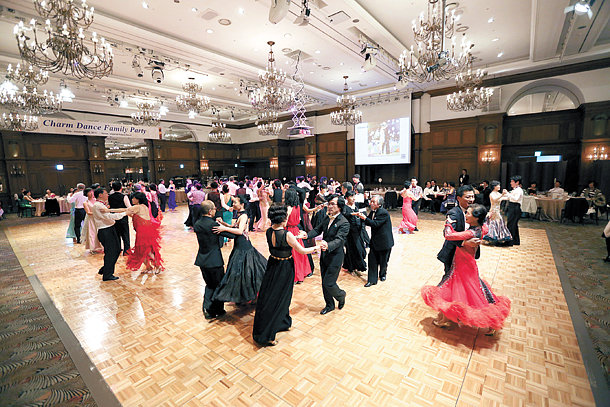 The Cham Dance Family holds dance parties at the Imperial Palace Seoul Hotel in southern Seoul to give couples a place to hang out and do hobbies together. [CHAM DANCE FAMILY]

There is a joke in Korea about how to tell whether a woman and a man are married or not when playing golf. When the two look together for a ball the woman hit deep into the rough, there is a high chance that they are not married. If the woman is looking for her ball alone while the man walks off to get his own ball, there is a 99 percent chance of them being married.

But not all couples are stuck in this trap. Some find a place to spend time together at a dance club that only accepts married couples as members. The Cham Dance Family, a club started in 1999, includes couples who have taken a dance class from a married couple - Nam Mi-gyeong, who is a professor at Kangnam University, and Jeong Gi-Cheol, president of Cruise Dance Company. Nam and Jeong give lessons at Cruise Dance Company’s studio in Apgujeong-dong, southern Seoul, at cultural centers at Hyundai Department Stores in Apgujeong in Seoul, in Ilsan and in Bundang, Gyeonggi.

Nam and Jeong teach dance sports, which is recognized by the International Olympic Committee and was an official event for the Guangzhou Asian Games in 2010.

Jeong and Nam themselves met through dance. They said they do have fights from time to time, but they often resolve tensions between them by teaching dance to others or dancing together themselves.

“When we see others treat their partners with care, we learn a lot,” said Nam.

As they have found a way to stay close through dance, they show other couples that anyone can use dance to share more with their life partners. Nam said many people find it interesting to express themselves with their bodies, in time with the music. She said that those who don’t have much talent in dancing or following rhythms tend to enjoy the dance classes much more, in contrast to the general idea that people with natural agility pick up dance moves faster.

On a Friday night at Cruise Dance Company in Apgujeong-dong, some couples gathered to learn basic dance moves. There is a floor-to-ceiling mirror set up in the room so students could watch themselves dance. Latin music played and the partners got close to each other at some points and danced apart at other points as they moved freely around the dance floor. The couples have to continuously look into each others’ eyes.

“Even though they are married, it can be awkward for two people to continue making eye contact and dancing,” said Jeong. “We tell people to look at the point between their partner’s eyes in those cases.”

After the awkwardness passes, friendliness comes along. Married couples said dancing together improves their relationships.

“As I learn how to dance, I think I get to hold my wife’s hands longer and make more eye contact than I have done for my entire life,” said Ji Won-yeon, a leader of Cham Dance Family. “It is hard not to have a good relationship with your spouse.”

His wife Go Yu-gyeong agrees. “I heard this is the only place where only married couples are accepted as members,” she said. “Many of them have known one another for over 20 years, so we are closer than our blood-related siblings.”

Currently the club has over 150 couples as members. Jeong said members know right away whether a couple is really married or just say that they are married to be part of this dance club. Jeong explained that there was once a couple who claimed they were married, and other members complained that they were making others uncomfortable. The club members suggested asking everyone to show a marriage certificate, and the couple in question naturally stopped coming. Since then, there have been rumors that anyone who wants to join should submit a marriage certificate. 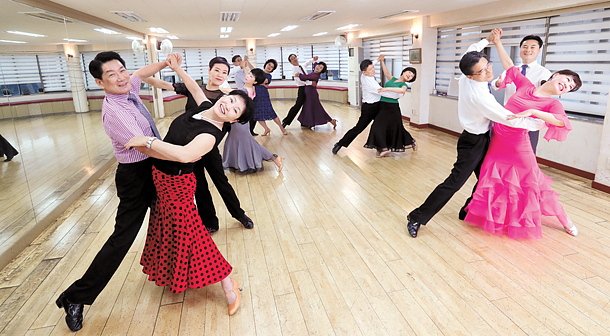 Social dances commonly do change partners during the moves. However, here at the club, members never change partners unless one spouse cannot be there due to health issues or a business trip. Then other close members can step in and do the dance together, but only the moves that require hand holding. Moves that require partners to hold each other closely are not allowed. The rule strictly applies, and even when a long time member gets widowed, he or she cannot continue to be part of this club. This has happened before.

“If a strange man and woman dance together and make some physical contact with each other, it is inevitable that they get some waves of feelings,” said Nam, adding that this happens in Korea because people were never taught proper dance etiquette when young and don’t know much about dance decorum. She added that such strict policies apply as some people still think dancing as a hobby can lead people to have extra-marital affairs.

The members get together and throw dance parties three times a year at Imperial Palace Seoul Hotel in southern Seoul. Husbands get gussied up in tuxedos, and wives wear luxurious ballroom dresses and show off the dance skills that they have practiced. They have parties at a hotel for a reason, even though some think the extravagance is too much. Jeong explained why.

“Young people have places they go to show off their characters, but adults rarely have those,” said Jeong. “Places [for adults] tend not to be so lively, and many couples don’t want to go together to these spots.”

So the party is a chance to show that couples can have a spot where they can enjoy being with each other and other couples, and wearing their fanciest clothes.

“We need a playground where adults can hang out, and it would be nice if we could use a hall at a local district government’s office or a resident center in each neighborhood,” Jeong continued.

Aside from hotel parties, members also take dance trips together to areas outside of Seoul or even overseas to celebrate members’ wedding anniversaries or birthdays. When they have these types of events, members usually invite their sons, daughters or other family members.

“Sons and daughters watch their parents dancing together, and then they say they have never seen their parents so happy,” said Nam, adding that some young people said watching their parents practice together at home inspired them to learn to dance themselves.

“Isn’t this really all about learning at home?” Nam asked.

Being in a dance club and showing their happy faces can set a good example to young ones for how they can strengthen their marital relationships in the future.

“Some part-time helpers who are college students often said they would tell their own parents to do the dance.”