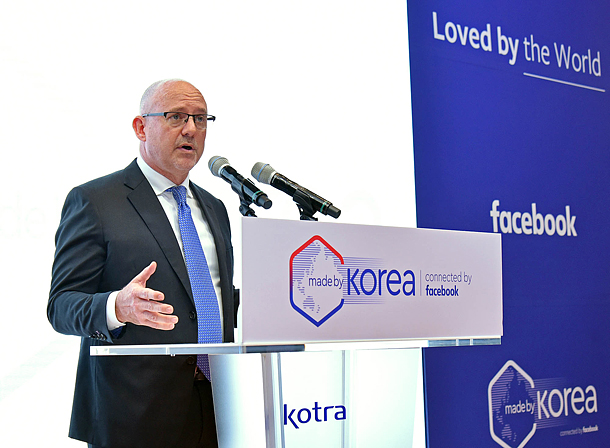 Dan Neary, vice president of Facebook for the Asia-Pacific region, delivers a speech at the launch event for MadeByKorea on Wednesday at the Korea Trade-Investment Promotion Agency’s headquarters in Seocho District, southern Seoul. [FACEBOOK KOREA]

The social media company and Korea Trade-Investment Promotion Agency (Kotra) on Wednesday launched MadeByKorea, an eight-week program that provides free education and training to small businesses, or SMEs, hoping to expand abroad. It is the first such program by Facebook.

“We give them the engagement tools that are going to help make them successful,” said Dan Neary, vice president of Facebook for the Asia-Pacific region, at MadeByKorea’s launch ceremony Wednesday at Kotra’s headquarters in Seocho District, southern Seoul. “And so that ranges in everything from training on management skills, marketing and advertising to business strategy, exporting and licensing.”

The social media company will offer tutorials on marketing, including strategies and best practices for online platforms like Facebook and Instagram. Kotra will provide advice on conducting business overseas.

“Our task at the moment is to reform the export structure by diversifying the companies that export and the products that are sold abroad,” said Kotra CEO Kim Jae-hong. “We hope the new program will contribute to this initiative.”

In March, Facebook and Kotra selected 57 small and medium-sized businesses to participate in a test run of the program, and some have already produced meaningful results.

Joamom, an online shopping site catering to expectant mothers, saw global sales this spring rise 20 percent from last year after it started marketing in the U.S. and Asian markets through Facebook. Sales in Japan posted a sharper increase of 30 percent.

For Facebook, MadeByKorea is part of a larger corporate initiative to support smaller companies in local communities.

The Korean office has provided support for start-ups and SMEs since 2015, starting with its Marketing Boot Camp program.

“Korea is one of the most well-established countries in terms of digital infrastructure, and we’ve seen many SMEs set foot abroad through it,” said Howard Han, Asia Pacific community engagement manager at Facebook. “But while spending my time at Facebook, I also saw that these companies were facing many difficulties. All of our support programs started from the question of how we can aid them based on what Facebook knows best.”

MadeByKorea has three eight-week sessions planned for this year, with an expected reach of 400 companies. Participants will be selected based on whether they have the sufficient infrastructure to do business abroad and whether they are already using Facebook as a marketing channel.