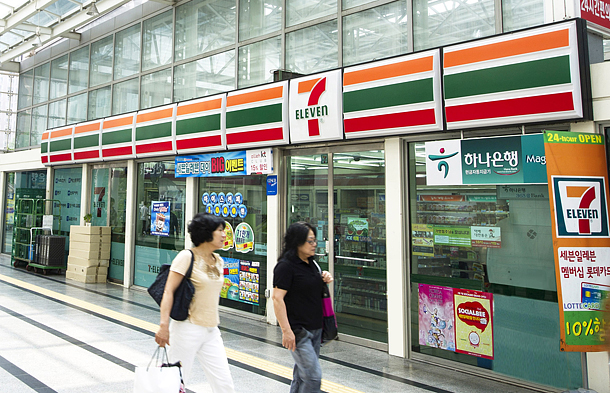 But while an average of 115 new franchise stores have opened up every day since 2015, 66 per day have also been forced to close, indicating how fierce the competition is.

These figures were announced by the Korea Fair Trade Mediation Agency on Wednesday. The agency’s primary goal was to provide a better understanding of the status quo in Korea’s franchise market, especially as the intense competition is increasingly becoming a major social and economic concern.

Although the agency has previously released individual information on different franchise industries, this is the first time that an overall assessment has been made. 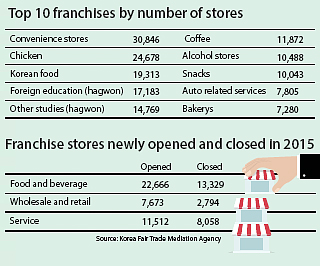 Last year there were 5,273 franchise brands, with 429 new brands introduced in just one year - an 8.9 percent increase. The majority of the newly created brands, 76.2 percent, were food and beverage franchises.

Within food and beverage franchises, Korean food businesses accounted for 1,261 brands, followed by fried chicken with 392. Coffee shops came in fifth with 325 brands. The number of franchise companies grew to 4,268, a 9.2 percent increase.

As of 2015, the total number of franchise stores in the country amounted to 218,997 shops, which is a 5.2 percent increase year-on-year. By number of stores, convenience stores topped the list with 30,846 shops followed by chicken restaurants with 24,678.

Convenience stores also turned out to be the first choice for many self-starters, as they don’t require any specific skills to run. In 2015 alone, 5,755 convenient stores opened, followed by 4,552 Korean restaurants and 3,988 chicken restaurants.

The study by the fair trade mediation agency came at a time when franchise businesses have been under heavy government scrutiny over the unfair business practices that have led to the arrest of Jung Woo-hyun, founder and chairman of Mr. Pizza.

With more baby boomers retiring and young people struggling to find jobs, franchise businesses have become a major alternative for those seeking a new livelihood. However, because of the intense competition with similar stores popping up in the same neighborhoods, many have struggled to have ends meet, and in some cases, franchisees have ended up losing their life savings after investing in an unsuccessful business.

“The competition in the chicken, snack and fast food market is fierce while the unfair business practices by franchise headquarters might have had some influence,” said Chang Choon-jae, the vice head of the mediation agency.

The franchise industry has become such a concern that Fair Trade Commission Chairman Kim Sang-jo announced that he would prioritize the protection of small neighborhood businesses and uphold fair competition - including implementing penalties against unfair business practices by franchise headquarters - as his top priority.

The study also showed that the oldest franchise brand is Lims Chicken. The chicken franchise started its business in July 1977 at the Shinsegae Department Store. Lotteria came in second with 36 years, another chicken franchise Pelicana came in third with 35 years and the bakery franchise Shilla Myunggua lasted 33 years.

Nolboo, a franchise that specializes in Korean cuisine including its signature dish budae jjigae, a stew made with instant noodles and other items including sausage and ham as well as dumplings, took second place after Theborn Korea with 13 brands.

The franchise company that took the third spot by number of brands, however, wasn’t in the restaurant business. Soft Play Korea took the No.3 spot with 13 brands. The company specializes in indoor preschools and children’s playgrounds.