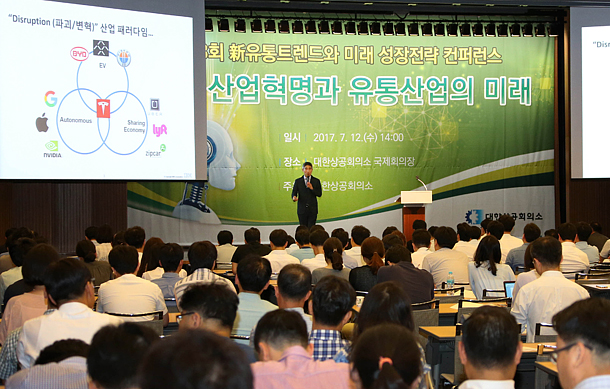 The next leader in retail will be the company with the best technology, according to retail and tech panels held during a conference hosted by the Korea Chamber of Commerce and Industry in central Seoul on Wednesday.

The conference’s main theme was the future of retail in the fourth industrial revolution. With the development of technology that can collect and analyze vast amounts of consumer data, retailers and industry analysts discussed how the information can be used to personalize services and generate repeat customers.

“Technology based on connection and convergence is trickling into the retail industry and forming a business atmosphere that never existed before,” said Son Gun-il, partner for global business services at IBM Korea. “The range and speed of change gives companies a difficult task.”

Kim Tae-yang, a vice president at SK Planet, said the future of retail will be chatbots, virtual assistants that customers can communicate with.

Tony Lee, CEO of the artificial intelligence company Saltlux, stressed that the focus should shift from big data to “smart data.” “Retail is an industry that can earn large amounts of consumer information,” he said. “Then the question becomes, how can we acquire it upon permission from consumers? How can we safely manage it? And how can we use it effectively for enhanced personalization?”

Song Chae-hoon, director of Skonec Entertainment, a company that produces virtual reality and augmented reality content, argued that the two technologies are disrupting the retail industry by changing consumer spaces and experiences.

“VR and AR technologies not only offer an opportunity to provide a differentiated shopping experience but also functions as a tool to collect consumer information,” Song said.

Ryu Han-seok, who runs the Institute for Technology and Culture, said brick-and-mortar retailers, especially major ones, should shed their conservative ways of thinking and put effort into upgrading their technology instead of trying to develop one solution with high hopes of immediately generating revenue.

“If nobody’s investing in new technology at the moment, your company doesn’t have to either,” he said. “But if somebody is and that company turns out to succeed in the future, others will inevitably face difficulty surviving in the market.”