‘We did everything we could to protect the service sector’

‘We did everything we could to protect the service sector’ 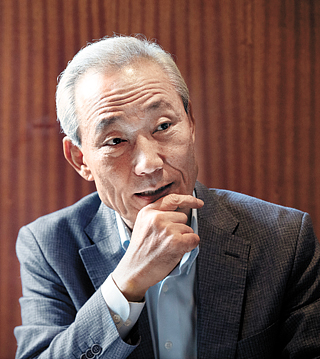 Looking around the Business Center on the second floor of the Grand Hyatt Seoul, Kim Jong-hoon, South Korea’s former chief negotiator for the Korea-U.S. free trade agreement (Korus FTA), recalled the day in April 2007 when his delegation and his U.S. counterparts signed the deal at the Hyatt Hotel, putting an end to 14 months of aggressive negotiations.

“We chose this venue because it has no windows. We thought it would help strengthen our focus on the negotiations,” recalled the former chief negotiator. The JoongAng Ilbo sat down with the 65-year-old former diplomat and a one-time lawmaker last Thursday.

Q. How was the negotiation process?

A. The wrap-up part at the last stage was particularly hard. Local media prematurely reported that the agreement had already been reached when in fact the sides still had some disagreements that needed to be ironed out. The most difficult part was a negotiation on the imports of U.S. beef and a renegotiation for the FTA. Just the fact that we had to go back and re-open a negotiation for the matter that we had thought already settled was mentally exhausting.

During renegotiations, you insisted on using the term “consultation” instead of “renegotiation.” In November 2010, you even said you would not even put a comma or a dot to make your point that there would be no renegotiation.

I made such remarks as part of a strategy. There are many fronts to face for someone who is at the negotiation table on behalf of a country. The first front to deal with is a foreign country that you are negotiating with, of course. The second front to deal with is many bureaus within our administration. Even within our negotiation team, members had different agenda depending on what bureau they came from.

Our U.S. counterparts had local media reports translated into English within 24 hours they were published in preparation for the negotiations before sitting at the able. When there were many fronts to deal with, I had no choice but to target the foreign counterparts. After all, it is a power match filled with tension.

Right before the National Assembly’s ratification of the Korus FTA, you wrote a column for the JoongAng Ilbo in November 2011, saying, “No one has the right to deprive my two-year-old granddaughter of an opportunity to excel on the global stage [through the FTA].” In the column, you also said, “Opening the door to widen the market and compete with the world to lay the foundation for the prosperity of the people is the mission of the time.”

That two-year-old granddaughter that I mentioned in the column is now an elementary school student. Some young people told me they thought the FTA would make their lives harder because an FTA means more competition with foreign nations.

They also told me the country has a widening wealth gap and wealth redistribution problems (thinking that an FTA would only aggravate them). These are the issues we as a country should look into in earnest to solve. But around the world, there is not a single country that is free from the wealth redistribution problem. We need to work harder to narrow the wealth gap, but it should not distort market mechanisms. What I want to emphasize is that the domestic paradigm and international paradigm are two completely different things.

Can you elaborate on that?

Domestically, people (from different sectors) could help each other redistribute wealth. But it’s not possible between states. International relations are primitive, naked and cruel by nature.
While the Development Assistance Committee under the OECD implements official development assistance to countries in need, the amount of aid collected always falls short of its initial target. We have to have a mindset that outside of the border, we have to compete on a level playing field with nothing but our own talent and capability. It is only after we excel in international competition that can we look after ourselves domestically.

An agreement for the renegotiation of the Korus FTA was reached in 2010. The JoongAng Ilbo back then said on the front page that we yielded more to the U.S. while our demands were scarcely met. The then-opposition Democratic Party used that article to criticize the process in an attempt to turn public sentiment against it.

It is true that we yielded more to U.S. demands. For instance, we saw setbacks in the automobile sector. But at the same time, we made some progress in the pharmaceutical sector.

While many offered projections (in the first months after the ratification) regarding who benefited more and who yielded more, more projections appear wrong than right in retrospect. The fact that U.S. President Donald Trump addressed the Korus FTA during a summit meeting underscored that point.

Do you have any regrets about the FTA renegotiations?

We did everything we could to protect the service sector. I hope we can open up more service fields except for those of public interest so that it can give us a momentum to restructure the industry (to meet demands of the time). I am sure that we would have faced much more fierce backlash against the free trade deal had we opened up more service sectors in the renegotiation.

Do you think the deal will be renegotiated?

President Trump’s remarks on the mater have been intense and frequent. It is not something he just blurted it out, but something that is deep in his agenda. But Washington will only try to deal with the Korus FTA after it finishes renegotiation for Nafta (The North American Free Trade Agreement).

In both the U.S. and South Korea, we need to undergo domestic procedures (for the renegotiation) such as consultation with the Assembly under due process. Renegotiations could kick off next spring at the earliest. There will be a great amount of tension at the table. We have to be thoroughly prepared.

Trump mentioned automobile and steel sectors as what need to be renegotiated to balance the U.S. trade deficits with Korea.

It’s all purely speculative to try to imagine what the U.S. will demand for renegotiation until it gives an official notification demanding renegotiations.

I asked American officials involved in trade what could balance the U.S. trade deficit with us. They said they didn’t know the answer either. For the automobile sector, Korea has a higher portion of foreign cars being sold in the market. The U.S. demanded Korea open up the automobile market starting from the 1980s and had their demand answered with the Korus FTA.

But it turned out that much of the benefits from Korea opening up its automobile market have gone for European carmakers. Our car market is not insulated. It’s just that U.S. cars are not being sold as much.

The government can’t tell people to buy U.S. cars instead of European cars, can it? For steel, it is not a bilateral issue between the U.S. and Korea but a global issue sparked by oversupply. Would the U.S. trade deficit with Korea be gone had the Korus FTA been scrapped? No, it would not. A research center under the Department of Commerce in the U.S. estimated the U.S.’s trade deficit would rise to $40 billion without the Korus FTA.