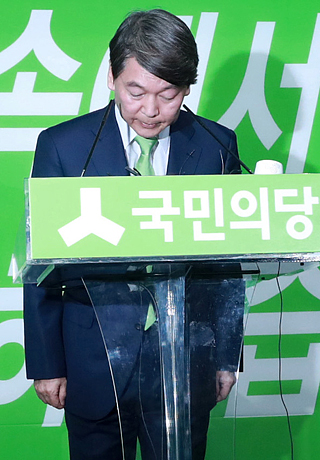 Ahn Cheol-soo, former chairman of the People’s Party and its former presidential candidate, issues an apology to the public on Wednesday for a smear campaign against Moon Jae-in that used a phony recording. [YONHAP]

Breaking a long public silence, Ahn Cheol-soo, former presidential candidate of the People’s Party, said on Wednesday he was “very sorry” for a dirty tricks campaign before this year’s presidential election that has become the biggest political crisis for the party he co-founded a year ago. Making his first public appearance since the scandal broke out late last month, Ahn said he felt “devastated” and shared “responsibility” as the party’s presidential candidate.

“This fake audio scandal can not be justified under any circumstances. I was shocked to it hear about it when it first emerged,” said the former party chairman in a somber tone.

“I bow my head in apology to the people who endorsed me [in the May 9 election),” said the former candidate at a packed briefing room at the party headquarters in Yeouido, western Seoul.

Ahn did not declare his retirement from politics as a way of taking responsibility for a scandal that has sent his party’s approval ratings to the single digits.

Instead, the software mogul-turned-politician said he would spend time “in self-reflection.”

“I will give up everything and spend time in self-reflection,” he said. “I will look back on the past five years that I have spent as a politician.”

Ahn’s press conference on Wednesday came 16 days after the party first acknowledged it had used a phony audio file to smear the Moon Jae-in camp on May 5, just four days before the election. The phony audio file and faked screen grabs of a group chat alleged that Moon’s son landed a full time job at a state-run institute in 2006 thanks to his father’s senior role in the Roh Moo-hyun Blue House.

Hours before Ahn’s apology, Lee Jun-suh, Ahn’s ally and a former member of the party’s decision-making body, was detained after a local court granted a pre-trial detention warrant for him demanded by the prosecutors. Lee is accused of knowing that the audio file and screen grabs created by Lee Yu-mi, a party member, to smear Moon could have been fake. Lee Yu-mi is being detained as well.