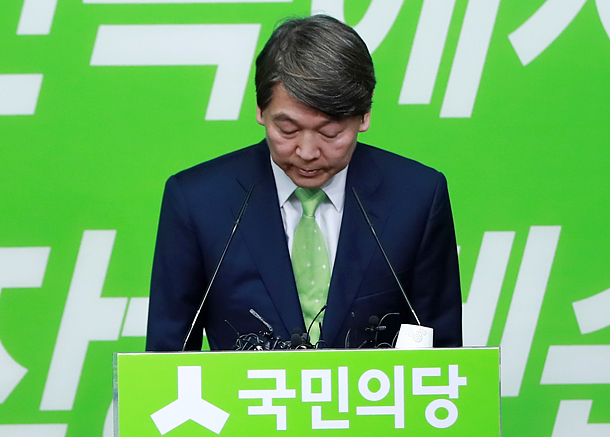 Ahn Cheol-soo, former chairman of the People’s Party and its former presidential candidate, issues an apology to the public on Wednesday for a smear campaign against Moon Jae-in that used a phony recording. [YONHAP]

Breaking a long public silence, Ahn Cheol-soo, former presidential candidate of the People’s Party, said on Wednesday he was “very sorry” for a dirty tricks campaign before this year’s presidential election that has become the biggest political crisis for the party he co-founded a year ago. Making his first public appearance since the scandal broke out late last month, Ahn said he felt “devastated” and shared “responsibility” as the party’s presidential candidate.

“This fake audio scandal can not be justified under any circumstances. I was shocked to hear about it when it first emerged,” said the former party chairman in a somber tone.

“I bow my head in apology to the people who endorsed me [in the May 9 election],” said the former presidential candidate at a packed briefing room at the party headquarters in Yeouido, western Seoul.

Ahn did not declare his retirement from politics as a way of taking responsibility for a scandal that has sent his party’s approval ratings to the single digits.

Instead, the software mogul-turned-politician said he would spend time “in self-reflection.”

“I will give up everything and spend time in self-reflection,” he said. “I will look back on the past five years that I have spent as a politician.”

Ahn gave up his parliamentary seat days before the May 9 election to show his commitment to winning the presidency. Even so, he came in a distant third with a nearly 20 percentage gap between his votes and those for Moon Jae-in, who was sworn in as president on May 10.

On why it took him so long to issue a public statement despite many calls for one in and out of the party, Ahn, who launched his political career as a champion of a new politics free of corruption and self-interest, said he considered it important for him to “understand the facts correctly.” He said he watched the ongoing investigation “in agony.”

Ahn’s press conference on Wednesday came 16 days after the party first acknowledged it used a phony audio file to smear the Moon Jae-in campaign on May 5, just four days before this year’s snap presidential election. The phony audio file and faked screen grabs of a group chat alleged that Moon’s son, Joon-yong, landed a full time job at a state-run institute in 2006 thanks to his father’s senior role in the Roh Moo-hyun Blue House.

The voice on the tape claimed to be a friend of Moon Joon-yong from his time studying at the Parsons School of Design in 2010. It turned out the voice was actually that of the brother of a member of the party, Lee Yu-mi. Lee Yu-mi also allegedly captured screen grabs of a three-way group chat, which she alleged involved herself and two of Joon-yong’s friends from Parsons. One person says in the chat that Joon-yong had talked about a “free pass” that got him into KEIS (Korea Employment Information Service). It was revealed that Lee Yu-mi typed all three parts in the chat using three different mobile phones.

Lee Yu-mi, the CEO of a startup company, was reported to have faked the materials because she was under growing pressure from Lee Jun-suh, a senior Ahn Cheol-soo camp official and Ahn’s ally, to provide some kind evidence to be used against Moon.

Hours before Ahn’s apology, Lee Jun-suh was detained after a local court granted a pre-trial detention warrant for him demanded by prosecutors. Lee is accused of knowing that the audio file and screen grabs created by Lee Yu-mi to smear Moon could have been fake. Lee Yu-mi is being detained as well. On Lee’s detention, Ahn said he respected the court’s decision and asked his party to fully cooperate with a thorough probe.

During the court’s review of the validity of the pre-trial arrest warrant, the prosecutors reportedly argued that Lee Jun-suh committed “definite negligence” in not cross-checking the fake evidence submitted by Lee Yu-mi even though he had known they could have been fake. After obtaining the fake audio file and the screen grabs, Lee Jun-suh forwarded it to the campaign headquarters, which used them to smear Moon in a May 5 press briefing.

The detention of Lee Jun-suh has made the crisis much worse for the party, which has 40 lawmakers in the National Assembly. Announcing its in-house probe into the matter on July 3, the party said it found no evidence whatsoever to suspect Lee Jun-suh or any other party official, including former candidate Ahn, had known that the evidence was fake. It also said the making of the fake material was planned and carried out by Lee Yu-mi on her own.

The court’s decision to allow the prosecutors to detain Lee Jun-suh is seen as a contradiction of the party’s internal conclusions.

The ruling Democratic Party (DP) pulled no punches at the People’s Party on Wednesday, saying Lee Jun-suh’s detention represented the party’s “failure to cut tails” to save top party officials from implication in the scandal.

“The People’s Party has to depart from its old-time political tricks,” said DP Chairwoman Choo Mi-ae during a party leadership member meeting.