Iraqi envoy thanks Korea for helping to defeat IS

Iraqi envoy thanks Korea for helping to defeat IS 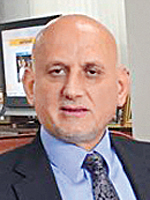 In declaring victory for the Iraqi forces over the Islamic State in Mosul, the largest city the group occupied, Iraqi Ambassador to Korea Wadee Al-Batti thanked the South Korean government and nongovernmental organizations for providing Iraq with financial and humanitarian assistance.

“We have more than two million refugees or IDPs [internally displaced persons] in Iraq, and while the Iraqi government fought against the terrorism group, we needed humanitarian assistance, and in this regard we appreciate what the Korean government did,” Al-Batti said in a press conference at the embassy in central Seoul on Wednesday. “For example, last year, the Korean government spent $7 million to assist the IDPs and, I think, another $3 million on stabilization of liberated areas in Iraq.” He added, “The Korean government had also issued many times statements condemning the terrorist attacks in Iraq. And Korean nongovernmental organizations have donated one minibus three months ago to a kindergarten in Iraq for refugees and are providing drinking water for the refugees in the camps near Mosul.”

Mosul is the second-largest city in the country and was the largest city held by the Islamic State (IS), which took power there in 2014. Before the IS occupation, the city had 1,137,000 residents, according to the United Nations. Thousands of its residents have died and fled during the nearly nine-month campaign of Iraqi forces against the armed extremist group.

“The victory over the Islamic State in Mosul may be the beginning of another fight,” he said. “And that is the fight for reconstruction. The group had murdered and raped people, and destroyed basic infrastructure in Mosul. The suffering some of the women had to go through cannot be measured.”

The ambassador emphasized the return of Mosul to Iraq as a turning point in resisting terrorism.

“Mosul has a special meaning for Iraq and for ISIS as well because it was the capital of its [self-proclaimed] caliphate,” he said, using the acronym for the Islamic State in Iraq and Syria.