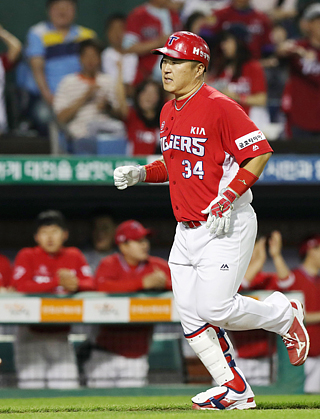 The Kia Tigers have sat comfortably at the top of the league since April 12 and show no signs of going anywhere. Choi Hyung-woo, the Tigers’ star batter, has been right at the center of the team’s recent success story.

As of Wednesday, Choi is ranked second in batting average at 0.375, third in home runs at 22, second in scoring and first in both on base and slugging percentage.

Prior to this season Choi was rarely a fan favorite, but in only a few months he has shot up in popularity as he quickly became the Tigers’ biggest problem solver.

During the game against the NC Dinos on Wednesday, Choi hit a finishing home run at the bottom of tenth for a thrilling 7-6 comeback victory over the Dinos.

“I’m satisfied that our team and I had good results in the first half of the season,” Choi said.

Choi first made his KBO debut with the Samsung Lions as a catcher in 2002. At the time, no one could have guessed that he would go on to become one of the most successful batters in the league. At one point in Choi’s rookie season he was even described as “lazy.”

Since the Lions already had their veteran catcher, Jin Kab-yong, Choi wasn’t given many chances to play. As a result he was released from the team. Rather than going back to the KBO, Choi joined the Police Baseball team, which plays in the Futures League, in 2006, a life changing decision. Choi’s time in the Police Baseball League counted as his military service.

When Choi first joined the police squad he changed position to be an outfielder and focused heavily on batting. With that, Choi led the futures league in home runs and by the time he fulfilled his military duty in 2007, KBO clubs were more than willing to recruit Choi.

Despite other offers, Choi ended up going back to the Lions and helped them win both the regular season and the postseason for four consecutive years from 2011 to 2014.

Once Choi became a free agent last year, he became the first KBO FA to sign a contract at 10 billion won and transferred to the Tigers. Aside from his abilities, the Tigers’ were also keen to sign Choi because of his exceptionally low injury rate.

Since the 2008 season, Choi has managed to play in 90 percent of the games and this year, he has only missed one game against the Lions on June 4.

“In skills, Choi Hyung-woo is complete and he is in his mid 30s,” explained Jang Sung-ho, a KBS N Sports commentator. “But the reason behind him improving every year is because he takes the responsibility and works hard to maintain it.”

Usually, once a player transfers to a different team on an expensive contract, they tend to feel overwhelmed, but Choi enjoys the pressure. As a result he is rated as an elite FA player in the KBO.

Though Choi likes to hear compliments about the Tigers’ success, he has never once thought that he was the one to lead the team.

“I think our team was successful with the addition of An Chi-hong, Kim Sun-bin, Lee Myung-gi and Kim Min-sik this season,” Choi said. “It feels good when people compliment me for the success of our team, but I want to be evaluated at the end of the season.”

Back when the Tigers were known as the Haitai Tigers they won the Korean series a total of nine times. But since changing their name in 2002 they have only managed a win once, in 2009. This year it looks likely that the Tigers’ may achieve another victory and, if they do, Choi looks set to win the MVP award for the first time in his career.

“As long as my team wins, a personal title is not that important of a factor,” Choi said.