De Jong is set to race for Korea

De Jong is set to race for Korea 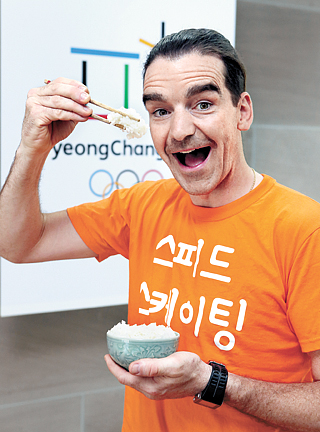 At the 2010 Winter Olympics in Vancouver, Lee Seung-hoon won a gold medal in the men’s 10,000 meter event at the Richmond Olympic Oval in Canada, but it seemed as if he was standing on the podium for someone else.

It could be argued that Lee’s win was luck, as the victory came after Sven Kramer of the Netherlands was disqualified for entering another lane. When Lee took to the podium, Bob De Jong of the Netherlands and Ivan Skobrev of Russia, the bronze and silver medalists, lifted Lee up in the air and celebrated his victory. Though Lee’s gold medal was earned by De Jong’s teammate getting disqualified, De Jong showed no sign of discomfort and celebrated Lee’s victory.

Seven years later, last May, De Jong has now become the Korean national speed skating team’s assistant coach, where the players who once competed against De Jong are now under his coaching. 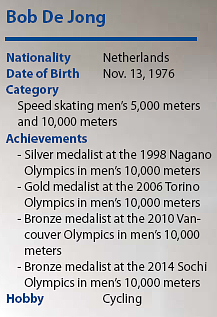 Throughout De Jong’s career, he has won a total of seven gold medals in the men’s 10,000 meters at the World Championships, as well as one gold, silver and two bronze medals at the four Olympics he has competed in. Not only that, since De Jong maintained the top spot in the Netherlands, a powerhouse for speed skating, the Korea Skating Union (KSU) set high expectation as coach for the upcoming Olympics. Up until last year, De Jong was a coach for the Canadian and English national speed skating team. Behind his success as a player and as a coach, many questioned his reasoning behind De Jong joining the Korean speed skating team.

“While I was questioning about where to go, the Korea Skating Union emailed me offering a position as a coach,” De Jong said. “My first interest in the Korean team started at the Vancouver Olympics after they won three gold medals. I saw great potential on the team and I wanted to see it myself.”

Though he made his decision to come to Korea, he certainly was worried, as this was the first time for De Jong to be living in Korea. But it was Guus Hiddink, former head coach of the Korean national football team that led Korea to the semi-finals at the 2002 FIFA World Cup, who helped him make his decision.

“Hiddink told me that if I went to Korea open-minded, then I’ll be able to see good results,” De Jong said. “And from the phone call, I made my decision to head to Korea.”

But still, De Jong is struggling to adjust to Korea. To remember the faces and names of the players, he saved pictures of their face and try to memorize them. In addition, is putting his best effort to learn Korean, having downloaded an app that teaches Korean.

From left, Bob De Jong points to the back of the shirt, presented from the Korean skaters; Lee Seung-hoon celebrates his victory in the men’s 10,000 meter race at the 2010 Winter Olympics in Vancouver, with De Jong on the right; De Jong racing at the Olympics. [CHOI JEONG-DONG, KOREA SKATING UNION, YOUTUBE SCREEN CAPTURE]

“When I didn’t have training, I’ve been to Gwanghwamun, Gyeongbokgung and other historic places to learn about Korea’s history,” De Jong said.

Though De Jong struggles in adjusting to Korean culture, when the topic of training comes up, he is a wealth of information.

“The biggest strength of the Korean players is their explosive speed,” De Jong said. “We’ve been training according to the program I made but they are stiff when training. I want our players to enjoy training and allow themselves a little more freedom.”

Of all the team members, Mo Tae-bum, a gold medalist in men’s 500 meter race at the 2010 Vancouver Olympics left the strongest impression to De Jong. Aside from Mo’s surprise gold medal two Olympics ago, he hasn’t had any outstanding performances in any international events.

“I could tell that he worked hard just by looking at his body,” De Jong said. “He’s a player to watch out for at the PyeongChang Winter Olympics.”

Not only the Korean players and the KSU, De Jong also has high expectations for the Olympics, where he set his goal to winning at least three gold medals for Korea.

“Korea’s got a lot of gold medal candidates at the upcoming Olympics like Kim Bo-reum, Lee Sang-hwa, Lee Seung-hoon and many more,” De Jong said.

When asked about which team he will be rooting for at the upcoming Olympics, De Jong said “Korea” without hesitation.

“Though my heart is from the Netherlands, since I’ll be wearing the Korean uniform in PyeongChang, I’ll belong to Korea,” De Jong said.