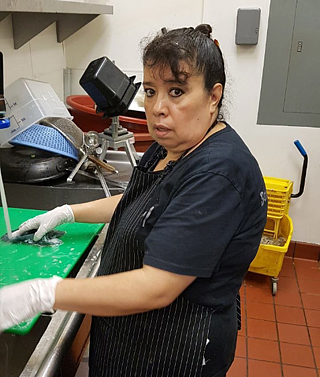 Daniel Lee runs a restaurant in Los Angeles. The state of California pledges to raise the minimum wage to $15 by 2022. The minimum wage was $8 three years ago. It was upped to $10.50 in January. Small workplaces employing 25 people or fewer are allowed to delay the implementation for a year.

I asked Lee if I could quote posts from his Facebook page and he said yes.

He wrote about his employee Eva, who is 50 years old (pictured at right). She doesn’t speak English and lags in productivity compared to other staff. She won’t be able to easily find a job elsewhere. Lee has kept her on because he likes her simplicity. But now he is letting her go. A new employee, Garcia, has offered to double her work hours to eight and proposed to cover for Eva’s work. She is 28 years old and a single mother who receives 50 percent higher hourly pay than Eva. She is looking for longer hours to support her child.

Lee is thinking about installing an automatic cash register. He is looking for ways to cut costs because of the sharp rise in wages. If he finds some kind of self-checkout solution, he may have to sack Garcia as well. If the minimum wage did not go up so high so fast, Lee would not have to dismiss employees he liked. He worries about Eva ever finding a job.

California Governor Jerry Brown promised higher minimum wages to win election in a state with a high population of immigrants. Brown was able to steal the governorship from the Republicans for the first time in 28 years.

Proponents want the minimum wage to be higher, but do not have lucid or persuasive arguments. South Korea is not that rough in its hourly pay. On the scale of the Organization for Economic Cooperation and Development, Korea pays the eighth highest. The share of compensation of employees (wages paid to employees) against the national income is 64 percent for Korea, which is higher than the OECD average.

Wages in Korea have been rising by the fastest pace in the world. They rose more than 7 percent per annum over the last four years. To push up the minimum wage to 10,000 won by 2020, hourly pay must be raised 15.7 percent a year, which is too burdensome for an economy generating growth of less than 3 percent.

Minimum wages can be an example of the paradox of goodwill. Higher wages can push low-wage workers out of jobs.

After studying the minimum wage for 25 years, economist Alan Krueger concluded that raising it does not help solve poverty. He argued that an earned-income tax credit could work better to improve the livelihoods of low-wage workers.

From 2020, the baby-boomers in Korea will be retiring. Most of them will have to start businesses to support themselves. Last year, 830,000 self-employed people went bust, up 13 percent from a year ago. That means 2,300 people had to close businesses every day.

When the minimum wage goes up to 10,000 won, about 270,000 would likely lose jobs at restaurants. The first to go will be the seniors, unskilled, and least productive workers. Thousands of Korean Evas would be out of jobs.