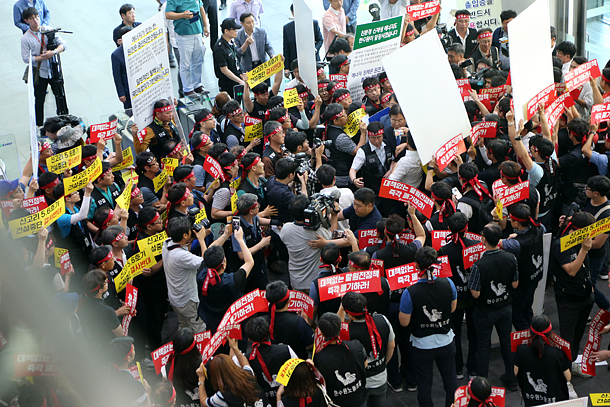 Members of the Korea Hydro & Nuclear Power Corporation labor union block company CEO Lee Kwan-sup from entering its headquarters in Gyeongju, North Gyeongsang, for a board meeting on Thursday. [YONHAP]

Korea Hydro & Nuclear Power Corporation, which operates the country’s nuclear power plants, planned to hold a board meeting on Thursday to decide on whether construction of the Shin Kori 5 and 6 reactors should be halted.

But a backlash from their labor union and people living near the construction sites forced them to call it off.

The board meeting was supposed to begin at 3 p.m. at KHNP’s headquarters in Gyeongju, North Gyeongsang.

It was canceled around 3:30 p.m. after some board members were blocked from entering the building by some 600 KHNP labor union members and residents of Ulsan, where the two reactors are being built.

The union and local residents want construction to continue because jobs are at stake along with compensation money to local areas.

Police sent 800 officers to the headquarters in case of brawls.

KHNP’s union says a suspension of construction will cost jobs. It also complains that the management didn’t discuss the issue with them.

People living near the plants argue that killing the plants will reduce jobs in the area and rob them of the compensation they were going to receive for allowing the reactors to be built near their homes.

Regional governments that allow nuclear reactors to be built receive tens of billions of won in compensation. They have to return the money if construction is permanently shut down.

The head of the power company said he will do everything he can to prevent residents of Ulsan from suffering from the suspension.

“Our policy is to follow the government’s plan to have the public decide on this issue,” KHNP CEO Lee Kwan-sup told residents of Ulsan who visited the headquarters to protest the board meeting.

“We will work with the greatest care to reduce the damages that residents might face.”

Many predicted that the board would vote for halting the construction since the six executive directors were expected to follow the government’s lead. If they voted in favor, the board needed just one more vote from a non-executive member.

“The board meeting that was supposed to begin at 3 p.m. didn’t and how to hold the next meeting will be decided after discussions,” said a representative from KHNP.

President Moon Jae-in stopped construction of the two reactors last month as part of his policy to wean Korea off nuclear energy.

He said he will create a commission that will hear public opinion on the suspension.

KHNP is a public institution under the Ministry of Trade, Industry and Energy. The Trade Ministry sent an official letter to the KHNP after it decided to halt construction of two reactors. Under current law, energy providers have the responsibility to actively cooperate with the government’s energy policies. The board has a right to decide on the key decisions of the company.

KHNP sent out official letters to the companies building the nuclear reactors and asked for cooperation in the temporarily suspension.

But contracts with companies like Samsung C&T, Doosan Heavy Industries and SK E&C don’t have any articles dealing with a shutdown of the project, which could lead legal challenges.

Samsung asked the KHNP to clearly state what the company should do and how it will be compensated.

SK also asked the nuclear power plant operator how they will pay for managing the company and its contractors’ equipment and employees stationed at the site.

The KHNP estimated damages from the suspension at about 100 billion won ($87.9 million), including 12 billion won in labor fees if construction is halted for three months.

The company’s union said it will file a lawsuit against the board for misappropriation if they decide to halt the construction and pay compensation to construction firms.

Opposition parties are criticizing the president’s move to push ahead with a nuclear free energy policy.

“There are no legal grounds to halt the construction of the Shin Korea 5 and 6 reactors but they were suspended after the President’s order,” said Kim Do-eup, a lawmaker from the opposition Liberty Korea Party at a meeting of National Assembly’s trade committee held on Wednesday.

Lee Chae-ik, another lawmaker from the Liberty Korea Party, said the government’s plan to create a commission to hear public opinion on the issue is faulty since it will not include experts from the nuclear power industry.

The Office for Government Policy Coordination will create a commission of nine members that will conduct a public assessment on whether to complete the Shin Kori 5 and 6 reactors.

But the commission is not supposed to have any representatives from the nuclear engineering or nuclear power industries.

As a result, 417 professors from 60 universities across the country and abroad released a joint statement urging the government to reconsider its policy.

The commissioner will be chosen by Prime Minister Lee Nak-yon.

“The government says electricity bills will go up about 20 percent by 2030 but my calculation shows they will go up by 3.3 times,” said Hwang Il-soon, a professor of energy system engineering at Seoul National University.

The two reactors are 28.8 percent complete and some 1.6 trillion won has been spent on them. The government expects it will cost about 2.6 trillion won to permanently shut down construction.