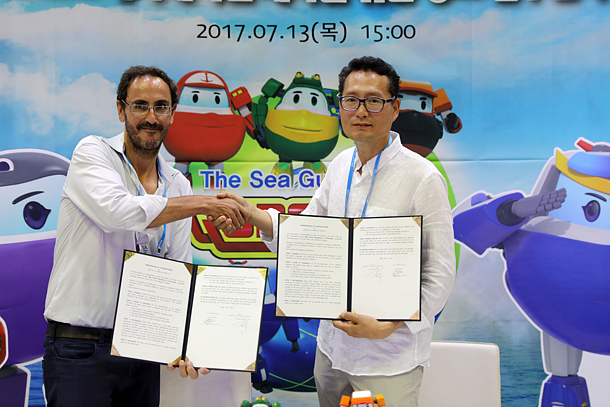 Petit K World International and Roboats Co. Ltd signed a contract with BEE-Production, a French animation production firm, on Thursday for co-production and overseas investment in the animation “Roboats.”

This agreement is part of Content Korea Lab Gyeongbuk’s marketing support, and took place at the Korea Character Licensing Fair 2017, where the promotional booth of the animation “Roboats” is placed. According to this agreement, Petit K World will be funded by BEE-Production, which will provide 7 billion won ($6 million) of the total 10 billion won needed to produce and distribute 52 episodes for overseas viewers.

“Roboats” is the first animation in Korea about ships that transform into robots to handle troubles at sea, and was first selected last year as part of Content Korea Lab Gyeongbuk’s project which funds start-ups.

On June 21, “Roboats” received 500 million won from the Ministry of Culture, Sports and Tourism, Korea Creative Content Agency and Yeongdeok county and is planning to produce five episodes for domestic fans.