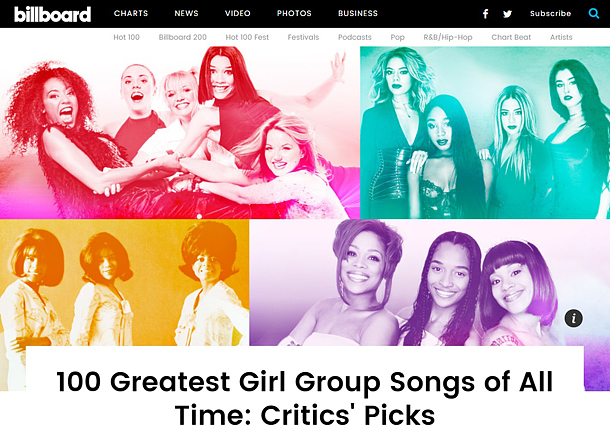 Five songs by K-pop girl groups, including “I Got a Boy” by pioneers Girl’s Generation, have received places on Billboard’s “100 Greatest Girl Group Songs of All Time.”

On the list posted on Billboard’s website, Girl’s Generation’s “I Got a Boy” took the top spot among Korean girl groups, 21st. Wonder Girls’ “Nobody” claimed the 43rd spot, with f(x)’s “Rum Pum Pum Pum” coming in at 59th. The youngest of the groups selected, Red Velvet, found itself at 70th with “Dumb Dumb,” and the now-defunct Fin.K.L., one of the first girl groups in Korea, took 88th with its song “Now.”

About Red Velvet, which has only four years of experience under its belt, Billboard said, “There are pop hooks that grab you, and then there are hooks that strangle you and absolutely refuse to let go. Red Velvet’s ‘Dumb Dumb’ epitomizes the latter, with the quirky quintet repeating the word ‘dumb’ more than 200 times.”

The chart, created by Billboard’s own music critics, listed the 1963 classic “Be My Baby” by The Ronettes as the best girl group song of all time. TLC’s “Creep” took second place, while “Will You Still Love Me Tomorrow” rounded out the top 3. The chart included songs by Destiny’s Child and Spice Girls.