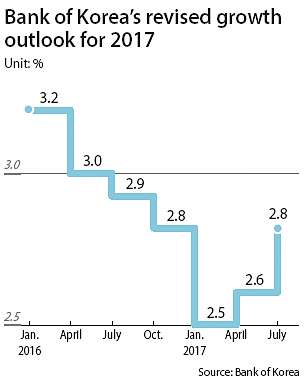 The Korean central bank revised up this year’s growth forecast to 2.8 percent from the previous prediction of 2.6 percent and froze its key interest rate on Thursday, a decision that was largely in line with expectations.

Governor Lee Ju-yeol of the Bank of Korea attributed strong exports and investment to the upward revision as the performance in those segments outweighed tepid domestic consumption and downside risks associated with geopolitical tensions and rate hikes in major economies.

“The growth of consumer spending still remains sluggish, but [the country] showed a stable growth with improved exports and investment,” Lee said.

He said that the latest projection didn’t take into account the effect of the supplementary budget pending at the National Assembly, adding that the forecast could further increase when the extra budget comes into effect.

The governor refrained from providing a specific numeric effect of the 11.2 trillion won ($9.7 billion) budget stimulus aimed at creating jobs, though the Ministry of Strategy and Finance estimated a 0.2 percent expansion on the country’s gross domestic product (GDP).

The Bank of Korea held its forecast for 2018 economic growth at 2.9 percent. The monetary decision came as central banks in major economies including the United States and the Euro bloc are on track to scale back quantitative easing and increase their benchmark rates.

Against the international backdrop, questions regarding whether a rate increase was likely dominated the press briefing. Lee struck a cautious note on an immediate rate hike but was more hawkish in tone than at the beginning of the year.

“If the trend of growth becomes more obvious, we can adjust or reduce the degree of monetary accommodation,” he said, noting that this doesn’t necessarily mean outright policy tightening.

Still, the governor hinted that the current economic conditions are not strong enough to warrant a rate increase from a record low at 1.25 percent.

”From a macro-economic perspective, the economy is on the right track for recovery,” the governor said, “But the conditions in the job market and household income - the factors showing qualitative improvement of the economy - falls behind expectations.”

The astronomical size of household debts would also likely stand in the way of a possible move as the decision could increase the pressure on indebted people.

Household debt rose by 7.8 trillion won last month, according to data the Bank of Korea released on Wednesday. The latest reading was down from 11.6 trillion won for the same month last year, but not an encouraging sign given that the government rolled out a set of regulations in June to rein in mortgage loans.

Analysts predict that the governor’s cautious remarks are signaling that a hike is unlikely within this year.

“The fact that the BOK held its 2018 outlook means that it is not sure that the growth will keep its momentum until next year,” said Kim Dong-won, an analyst at SK Securities. “The policy meeting confirmed that the shift towards tightening is unlikely this year,” Kim said, “Even if the BOK wants to move preemptively the timing [for a rate hike] will be next year.”

Lee Seul-bi, a fixed income analyst at Samsung Securities, predicted at least one rate increase next year based on Lee’s comments. “He said that the revised 2.8 percent GDP growth edges closer to the potential economic growth,” Lee Seul-bi said.

“He also mentioned that the gap between the real GDP and potential GDP can be closed if economic improvement continues. These comments are read as a signal of the possibility of a rate increase next year.”