LG unveils V30 ahead of IFA show in Berlin

LG unveils V30 ahead of IFA show in Berlin 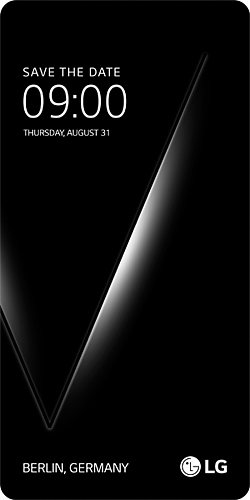 LG Electronics will unveil its V30 smartphone on Aug. 31, a day before the IFA consumer electronics show in Berlin. [LG ELECTRONICS]

LG Electronics will unveil the V30, its next flagship smartphone, on Aug. 31, a day before the IFA consumer electronics show starts in Berlin.

An invitation sent to the world press on Thursday offers a sneak peek at a bezel-free phone in the shape of the letter V.

LG said the phone will have an aspect ratio of 18:9, the same as its predecessor, the G6, which was unveiled earlier this year.

An aspect ratio is a screen’s length compared to its width.

With no bezel - the frame between the screen and the edge - LG is offering what it calls a FullVision screen. LG was the first in the industry to adopt the aspect ratio, which allows the screen to be evenly divided into twin squares so users can use two apps at once.

This is the first time that the world’s sixth-largest smartphone producer by market share will introduce a smartphone on the sidelines of the annual IFA tech show. From 2011 till 2014, Samsung debuted its new smartphones at the IFA show.

Samsung is opting to unveil the highly-anticipated Galaxy Note8 in the fourth week of August in New York before Apple comes out with a special-edition iPhone marking that device’s 10th birthday and a week before LG’s event.

LG has been showcasing its V series, known for the quality of its sound, through a series of events. The V10 was launched in 2015 in Seoul, while the V20 was unveiled simultaneously in Seoul and San Francisco in 2016. The company took the wraps off the G6, another high-end device, on the sidelines of the Mobile World Congress in Barcelona earlier this year.

LG’s plans for the V30 indicate a focus on sales in Europe. The 5.7-inch V20 was only marketed in Korea, the United States, China and a few European countries.

Insiders say the V30 will be equipped with an either 6-inch or 6.2-inch display, up from the 5.7 inches of its predecessor. If the screen is 6.2 inches, it will be the biggest in the LG lineup and the same as Samsung’s Galaxy S8 Plus.