Low-cost carriers start a race to the bottom

Low-cost carriers start a race to the bottom 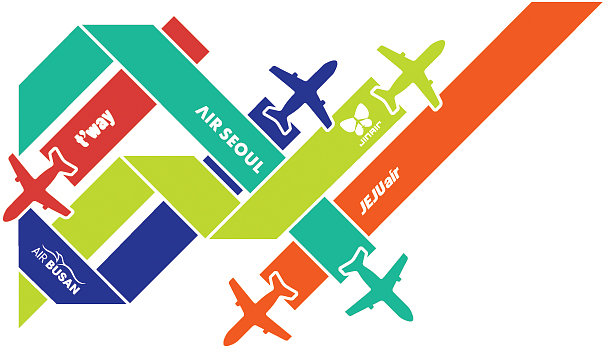 For a recent honeymoon, Heo Sung-hwan, a 28-year-old newlywed from Seoul, was able to score discount tickets to Hawaii on Jin Air, a low-cost affiliate of Korean Air.

“My wife and I considered higher-cost options because it was our honeymoon,” he said, “but we thought there wouldn’t be much difference in terms of service quality, except maybe the meals on the flight.”

Indeed, the couple found there wasn’t much distinction from a full-service carrier like Korean Air - and they paid less than 1 million won ($880) for the round-trip tickets.

Like Heo, many travelers are benefitting from low prices offered by the country’s six low-cost carriers, and they’re not just flying to domestic locales but international ones as well.

According to data accumulated by the Ministry of Land, Infrastructure and Transport, the popularity of LCCs has been growing rapidly since 2010. While LCCs made up just 41.4 percent domestic flights in 2011, that rate grew to 56.8 percent last year.

For international flights, the share grew from 4.3 percent in 2011 to 19.6 percent last year after LCCs began establishing routes to short-haul international destinations like Japan and Hawaii.

As LCCs expand, the competition over prices and service has gotten fiercer, and there are now concerns about the sector’s sustainability as more airlines crowd into an already packed market. 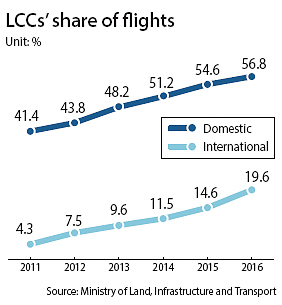 Low-cost carriers have already begun competing to attract customers going on vacation in the latter half of this year. Some of the most absurd deals include a one-way ticket from Seoul to Jeju Island for less than 15,000 won.

Air Busan, a low-cost subsidiary of Asiana Airlines, began promotions on three flights to Jeju and 23 international flights on Tuesday. The cheapest one-way ticket to Jeju departing between Aug. 27 and Sept. 30 costs 14,900 won, about the price of a cab ride from Jamsil in southern Seoul to Seoul Station. The discounted ticket is nearly a fifth of the original price, and the promotion runs through today.

Jin Air also started a promotion on tickets Tuesday for four domestic flights and 28 international flights departing between Oct. 29 and March 24 next year. The sale runs through next Thursday, and the cheapest ticket is a one-way ticket to Jeju for 16,100 won.

The LCCs’ obvious attraction is the price point, but some are also coming up with optional services at an extra charge to differentiate themselves.

Jeju Air, for instance, has come up with a package of three seats in a row, a pillow and blanket for passengers who want to lie down during flight for 100,000 won. A more common charged service is reserving a seat on the plane before boarding.

Jin Air last month started charging extra fees for customers who book international flights through airport counters or over the phone. Jeju Air, T’way Air and other LCCs have also charged extra for booking flights other than through online.

Unique in-flight meals are also emerging as a way for LCCs to earn a little more money. T’way Air started offering a Korean street food set that includes tteokbokki (spicy rice cakes) and fish cakes, a “Ni Hao! China” meal with egg fried rice and shrimp doused in chili sauce and an Italian meal that comes with risotto and pasta. 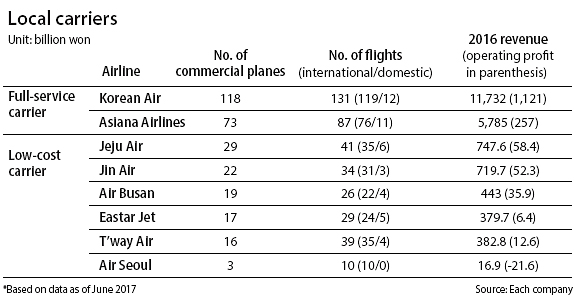 All the low-cost carriers have ambitious long-term goals as many have realized that they can’t hold up for any longer in the ongoing price war. Most of the airlines have devised service expansion plans that include adding more planes and routes.

T’way Air said last month that it hopes to operate 30 planes by 2020 and 50 by 2025. At least a fifth of the fleet will be larger-body models capable of flying long-haul flights to the Americas and Europe, as companies find the domestic market has less room to grow.

The smallest and newest LCC, Air Seoul, laid out goals last month to add two planes to its fleet every year for at least five years until it has 15 in service. The LCC, a subsidiary of Asiana Airlines, also said it would add four new routes to Osaka and Narita in Japan, Guam and Hong Kong this year on top of its existing 11 international routes.

While existing carriers are busy expanding, new entrants are boldly pushing into the crowded market with their own plans. Gangwon-based Fly Yangyang and North Chungcheong-based Aero-K have started the process of obtaining a license from the government, and if all goes well, “they may earn the rights to enter the LCC market as early as the end of August,” said Oh Young-seok, an assistant director at the Ministry of Land, Infrastructure and Transport.

While basic requirements for the license include securing more than 15 billion won in capital and three or more planes with 51 or more seats, the ministry also considers whether a carrier can sustain its business for two years after obtaining the license and whether the new companies add too much competition to the market.

Aero-K announced last month that it had secured capital of 45 billion won, three times more than required by the ministry, and ordered eight A320 planes. It also said it had financial backing from Hanwha Group and other investors.

The ministry is currently collecting opinions from related interest groups including existing carriers, local governments and other organizations on whether the two companies’ businesses will contribute to the wellbeing of the current LCC market and customers.

While the low-cost carriers are expanding, industry experts are doubtful about whether the market has any more room to grow.

“We can’t deny the local LCC market is already a red ocean,” said Park Sung-sik, an associate professor in the department of flight operation at Korea National University of Transportation. “New entrants must be able to prove their financial feasibility to sustain business in the longer term.”

According to Park even existing carriers like Eastar Jet and T’way Air are operating with impaired capital due to massive investment incurred in the aviation business. The CEOs of major LCCs fear there is not enough space at airports and pilots for all the competitors to keep expanding their size and for new companies to enter.

“A bigger issue to consider than concerns about heated competition is the lack of professional workforce like pilots in the aviation industry,” said Ryu Kwang-hee, CEO of Air Seoul. “It will also be hard for new entrants to find service slots at major airports as existing players already have difficulty securing new service infrastructure.”

“It is time to ask how LCCs can maintain growth and survive in five years and 10 years’ time,” T’way CEO Chung Hong-keun said at a press briefing last month.